Since Halloween was two days before last week's session, I decided to dress up. There weren't a lot of tricks, but there sure were treats at our First Thursday workshop; and candy too. 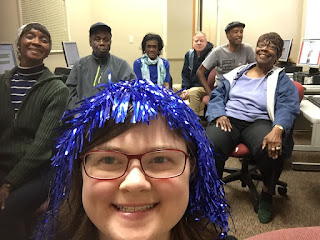 Veteran's Day is on November 11th this year, so the Philadelphia Senior Center decided to do something special this Thursday. Today, they're hosting a storytelling event where the veterans of PSC go onstage to tell their story. Edwina, one of the lovely people who runs PSC, told me about last week and said it would be on Tuesday from 1-2: the same time as Best Day. Naturally, this meant that we'd be holding Best Day at the Veteran's Day event. I'll give you the full details next week, but for now, here's some stories from the veterans at Best Day.

We are so used to thinking of propaganda as the work of malign force, and the enemy of our present freedom, such they are, that we forget what Boon "good" propaganda will do, war to the "art" in may cases.
During the WWII era, British women discovered how to "make do and mind" use the old cloth draw away materials made a new outfit or fashion such recycle during the notion of the war.
Populism is based on the notion that only few people can thing for themself. But the majority of peoples can’t and don’t want to! They need team up, follow the leader to guide them. Remember 1944 WWII had come to the end, God blessed us, we won the war to against fascism. But propaganda "sold" all of us the "good war" we fought. Even thousands and thousands of young men and women, children perished. We call them "great generation of heroes save our world."
The poem was famous, written as such: "We few, we happy few, we band of brothers for he today that shed his blood with me shall be my brother be he never so base and gentlemen of my motherlands. Cheap while any speaks that fought with me upon Saint Crispin’s days."
Now that we live in a world of "alternative facts" perhaps propaganda doesn’t look as a menacingly presence as it once did, may you like to know, a number of decades ago, the CZA under the guise of the Congress for is called "Cultural freedom" ran a convent to publish a literary magazine called "Enconta" publicity command upon poem, article. Made up story, sometime most are untrue. The nation’s highest security agency well played the propaganda. Even Russian leader’s might die of shock as the Cold War goes on.
Recently, I had read Metro News. The title of the article, "Trump looks might have made him President." The professor from Helsinki University said in the news "could it be that those with right leaning ideology are just because they are better looking? The research results suggest that the reason that politicians on the right are physically more attractive than the politicians on the left, the voter who lived political knowledge or sophistication are more easy influenced by the attractiveness that the chosen the candidate," the Dr. Longiver wrote.
I am very objective with his observation. Such baseless nonscientific research, very shallow, especially coming out of Sweden. I don’t believe the East European leader understood that America at all. No way the outside can really grass the cultures of politics of America, the racial war carried on may just for the fun of it. He wrote on his study that "just because you look good doesn’t mean you’re right." Sounds very fair-mind, in his common, but just skin deep he had undermined of American community did not know or how to pick a president for the country.
Donald Trump is a man known for his comb over, orange head skin, his tiny hands, woman hater. Furthermore, he represented the fibers of conservative attitude and has been associated with instances lower cognition, simple, and more basic modem of thought.
The notion of a rich businessman as natural-born leader, the character execute nation comes second to his more over policing message "Greed Is Good." Feel that, fight for more dollars is a good thing.
Even thought you can bankrupt the small company, gipped up the small subcontractor, short change the work’s pay dodge the tax because "I am someone"
That's not good propaganda as supposed to understand it as Walt Disney, Steven Jobs will be agreed upon if they are still alive.

Almost two years ago, I joined the Philadelphia Senior Center on Broad Street, south of Lombard to enjoy the daily hot lunches at a generous discount. Each day, I would search for an empty table to set my tray on so I could focus on eating!
The various members are fun to kid with. A set of twins can break my stones any day but as they are lovely ladies, they take it easy on me. One day after I had lunched, Beatrice took my arm and said, “You are a veteran and you’re coming with me upstairs to the auditorium.”
Volunteers introduced some veterans of World War II – each of whom spoke a few words. It’s been very rare in my life that I have “choked up” or suppressed tears. When my father died unexpectedly when I was 17 years old, I was so angry at God that I didn’t cry at the hospital or services.  However, I had good emotions while listening to the veterans and thinking of my uncles Tom and John and friends who had served in World War II.
Following some wonderful entertainment and a few more thoughts from veterans of the Korean and Vietnam Wars, we had coffee and treats on the stage and I met a tall strong well ribboned Marine who happened to be one of the sons of Beatrice on leave from Afghanistan and/or Iraq.
Months later, when Bernice took my arm after lunch and told me I was going to be a visitor at the “Writing Class”, I could not resist the charm and power of the lovely twins of Broad and Lombard Streets.

In the last 5 or so years, things have come to my attention that were shocking but with a little bit of effort, II would have realized years ago. Busy making a buck and playing various sports in the evenings kept me in a comfort zone were I was unaware of even local obstacles in the way of many wonderful, fellow Americans.
With curiosity as my formidable ally, I am excited about learning more in the area of enlarging the civic rights of the majority of my fellow citizens while enjoying much more of the experiences of my 5 wonderful children and 6 incredible grand-children.
The perspective I have as a military veteran fuel my interest in provoking my civilian opportunities for high school students and graduation before entering the military. More to follow!!! 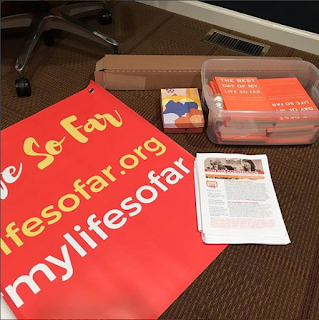 Today's the Day of our Center City Happy Hour! Meet us at 6PM at the City Tap House at 2 Logan Square in Philadelphia. There's a suggested donation of $10 at the door that will get you discounts on drinks for the night. Lots of people from Best Day will be there, including the founder and fearless leader herself, Benita Cooper. And if you want to be featured on this webpage, then hit me up and we'll take a Happy Hour Senior Selfie together!