Our Other Workshops (Norman, Adele, Lorie)

If you've been following Best Day for a while, then you know my group isn't the only one writing stories. There are several other Best Days located in Pennsylvania, including the Free Library of Philadelphia and Center in the Park (which our older bud Norman also writes for.) Plus, we also have workshops in Illinois, New Jersey, Oregon, and Washington. So here's a few stories that go off the beaten path. 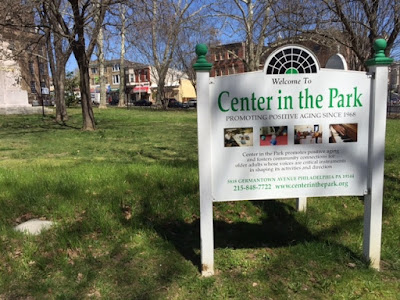 Each year, in June, I leave my premises with a folding chair and head towards South Street to engage in the atmosphere presented by the largest Afro-American Street Festival in the nation. Odunde means Yoruba New Year. The festival has been in existence for 42 years and annually attracts over a thousand spectators; who are entertained by break dancers, a spontaneous conglomerate of drummers on 22nd Street, other dancers keep alive a Brazilian martial arts form presented as a dance. The preceding is but a splattering of the street entertainment the Festival affords. There is also, between 1:30 p.m. and 8 p.m., continuous entertainment on the stage on Grays Ferry Avenue and 22nd Street and South Street. According to an article written in the Philadelphia Tribune newspaper,  the festival averages over 100 vendors who sell exotic art, t-shirts, books, and food Etc. The festival starts with a procession to the Schuylkill River. This is where sacrifices to Osun Aruba god of love.
Each year, I watched the drummer’s drum when they attend the procession. It is traditional for the drummers to perform throughout the day at 22nd and Bainbridge. That’s where I always spend the greatest portion of my Odunde time. I always enjoy this event. It is a culture. It is like a reunion. I always see folks from the previous year. This year I bought a complete set of poems by D. Maya Angelou, as well as well as her second autobiography “Gathered together in my name,” from a vendor who was from New York who’s cut-rate prices were phenomenal. His collection could take one into bankruptcy. Looking forward to the next Odunde festival. 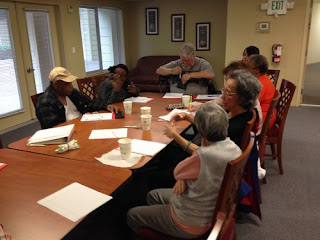 Adele
07.30.2014
Senior Housing Assistance Group Rainer Court, WA
I Know How To Cook Everything
I grew up on Ilocos Sur – that’s a province in the Philippines. It’s nice over there, but it’s hot – too hot. When I was 5 years old – already cleaning the house, riding bicycles, learning to cook. When I was 17, I know everything.  I went to Mindanao. I worked in a hospital. I learned to give medicine. I’m lazy to study, but I’m a quick learner. In school, I had to learn. When school stopped, I didn’t have to learn anymore. Now it’s like I forgot everything. Because I’m old.
I’m the youngest, I’m the one to take care of everyone I’m the mother, I’m the father. Early in the morning, I’m cooking rice. I know how to cook everything. I make sweet rice, puto, bibinka. I don’t use a recipe, I taught myself. Someone asked me to cook pancit. I didn’t know the recipe, I made up my own. People ask how come the color is like this? I don’t know!

Lorie Rosenblum
10.26.2016
Services For Adults Staying In Their Homes, IL
What Book?

I kept returning to A Tangled Web by Louisa M. Montgomery, the author of the Anne of Green Gables series. I was brought up in Canada, in the years during and after World War II.  I was a solitary and bookish child, gluttonous for reading.  A Tangled Web was a novel for grownups, and it featured romance, of course.  All I remember is this:  In a small town the heroine, quite young, has a feisty relationship with an older man, jousts of verbal wit.  The man is an outsider in the community, someone of stature, though – perhaps a doctor – and a bachelor.  He is in love with the young woman, but never tells her.  She marries, some kind of lie is told – hence the “tangled web.” Years later the heroine and the older man are brought together and profess their mutual love.  I think they marry.  I’m struck now how this theme – thwarted or forbidden romance between a young woman and an older man – kept turning up in my reading.  The two novels that I also returned to again and again with fervor were Bronte’s Jane Eyre and Daphne du Maurier’s Rebecca, each of which focus on a romance between a kind of princess in disguise – the girl may be plain but is valued for her mind – and a stern, taskmaster older man.  A powerful fantasy for an adolescent female, growing up in the fifties, with a handsome father, and looking for a prince charming far different from the bumbling, scornful adolescent boys she feared and despised.

The Story Cure in Erie, PA came and went, but you can read Kaitlin Kortonick's (Best Day's Community Engagement Director) recap here. Also, you can read Story Cure's writing here since we're talking about all the different places we work with.

Don't forget, on October 29th Best Day's Benita Cooper will be giving a lecture at the Perkins Center for the Arts' "Before I Die" Event. It starts at 3:15 and the address is 30 Irvin Avenue, Collingswood, NJ 08108.

And on November 9th Best Day will be having its Center City Philadelphia Happy Hour at the City Tap House. That starts at 6PM and the address is 2 Logan Square, Philadelphia, PA 19103. City Tap House is actually very close to my job, so you can meet me in person. We can even do some Happy Hour Senior Selfies!