Our class usually writes in Room B of the Philadelphia Senior Center, or we meet up in their computer room for First Thursday, but this week the Center was having a party in Room B. We moved to the art room and found a new bud, Linda Berry, painting a tropical island with watercolors. Fortunately, our class wasn't disturbing her painting, so we were more than happy to let her paint. 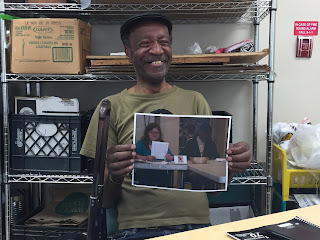 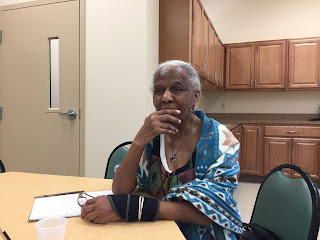 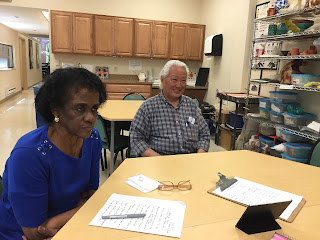 A little later Linda told us she was painting illustrations for a children's book set in Puerto Rico, since there weren't enough books for kids about Puerto Ricans or their culture. She was a retired teacher who was asked to illustrate, and the author was a librarian. She summarized the story for us and showed us page after page of beautiful illustrations. 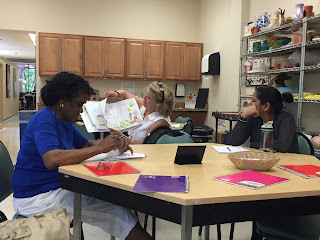 So this story is based on a traditional Puerto Rican fairy tale called "The Bird of Seven Colors," and it starts with a little girl named Mariela who lives alone with her mother. And Mariela is always having to do lots of work. Her mother is very much of a task-master. So the opening of the story is her doing the work with her three best friends, the hen, the pig and the cat.
This is them walking home, and her mother is just an angry kind of a nasty woman. And I have the text here now, we're linking up the text with the pictures. At one point, the mother gets very very angry--I have to un-angry her a bit--and throws all the wash up in the air. She didn't like the way the wash was done, so here's the wash all coming down. She's yelling "Dirty, dirty, dirty" in Spanish. And the daughter--this was thrown in there also, one of her jobs was to go look for eggs. Free-range eggs, back in those days. This is a fairy tale, so we're retelling the fairy tales.
So she goes out to get water in the pitcher, which hasn't been drawn yet. She falls and breaks the pitcher, and her mother yells "You have to go to the Bird of Seven Colors, and the bird will fix the broken pitcher." So here she's sneaking down the steps--I'm not sure if we'll be suing this since it's kind of hard to understand it. And so she finds the abuelas, the grandmothers who are so sweet, and we wanted to make sure the abuelas have very dark skin, very light skin and in between; because the Puerto Rican population is everything, like us. So we wanted to make sure we had that, some are thin, some are fat, that sort of thing. And the abuela tells her to go behind the hibiscus tree, so she goes, she gets to the beach (this is not the right face, I have to change that.) Because she's looking for the Bird of Seven Colors, the wave says, "Well when you get to the Bird of Seven Colors, (It's kind of like the Wizard of Oz) ask the Bird why I have no fish in my ocean."
And then she gets to the tree, the mango tree, and the tree says "When you get to the Bird of Seven Colors, ask the Bird why I have no mangos in my tree." And here she is talking to the tree, and pretty much going to run out of illustrations now.
And she gets to a very wealthy home of a plantation, and she says to the three girls who are living there--and the girls say "Ask the Bird why we don't have any children." So finally she gets to the Bird's house and this is the Bird's mother. The Bird's mother has the colors of the Bird, and one of her hairs has the wing or the tail of him. And so she's talking to the mother and the mother says "I will help you, but you have to stay away from my son. He's very very mean." Ultimately, they get all the answers.
The funniest answer I think is, um--The ocean doesn't have any fish because, I can't remember why. The tree has no fruit because there's gold buried underneath its roots. And the women don't have any children, and the Bird says "You have to stop staying outside and staring at the Moon." In other words "You need to go in and sleep with your husbands." But we don't say it that way to the kids!
We made sure that Mariela was a strong little girl, we didn't want her to be just a victim. So she's out there looking for her answer. And of course, it's not the Bird that gives her the answers, it's the journey that gives her the answers, pretty much, for herself. She goes back and ultimately the mother is swallowed up by the wave and she lives--we think--happily ever after with one of the abuelas.
It's a picture book mostly for young, young, young, kindergartner and first grade kids. But the older kids will read it too. So we're dedicating it, I had worked, I had taught school in Lancaster City, so we're dedicating it to all the children of Lancaster City. So anyway, I hope I didn't interrupt and thank you. 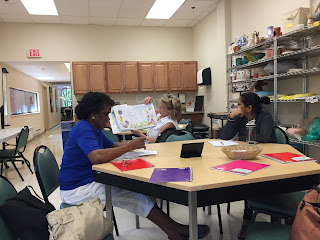 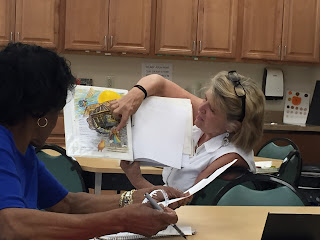 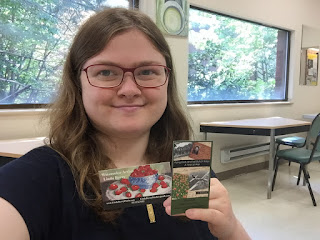 We can't wait until the book comes out, so I've decided to spread the word early. You can contact the illustrator Linda Berry at lindaberrypatch@gmail.com. The author Jill Bateman, can be reached at mapleavenuepress@gmail.com.
Curated by Caitlin Cieri
Newer Post Older Post Home