Mo had told me he was expecting his daughters to pay him a visit this past week. But what I wasn't expecting was that they would also be bringing his four grandsons! So Kathleen, Patrice, Aidan, Liam, Sean and Ian met the seniors and they all wrote stories together. Eugene was delighted by them, Frances was joking about the kids having to write even after school ended, Mike regaled them with a Japanese folktale about a farmer trading a bag of onions for a bag of gold, and Mo was introducing everyone to everyone and being his sweet self with his kids and grandkids. One of the kids was a little shy about sharing his story, so here's what the rest of Mo's family has to show off. 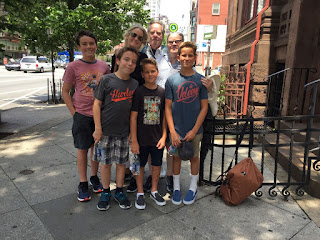 There were five kids, a Mom, a Dad, and a dog named Muffins, packed into the car heading north to the Pococnos on a warm summer day.
Back then, there were no cell phones, iPads, or laptops - so the radio or our own voices were our only way to pass the time on road trips. My Dad liked to sing, all the time, so the radio rarely came on. On thses trips, we all took a turn snging our song. Irish folk songs, pop songs, Johnny Cash - you never knew what was coming! My favorites when I as young were "I've Been Working on the Railroad" or "Who Threw the Overalls in Mrs. Murphy's Chowder?" - I never knew which one to choose but we usually got to sing more than once so it was never a problem!
My Dad's voice was always the loudest, the boldest and the most colorful - but we were learning from him as we winded around every curve, through every tunnerl and past every mountain peak we passed.
The Pennsylvania countryside was alive with song - as the Mawhinneys made their way north.

The date is the 22nd of June, 2017, and earlier today (1 AM) I flew into Philly. I was there to visit family and have a fun time. The moment I got to my grandma's house I went upstairs and fell nto my bed. I slept until 10:00 AM and when I got up I was happy to see a familiar dog sitting on my legs, Allison. After walking downstairs and seeing my grandma, I was startled by my cousin who was standing right behind me. We all went to the local Wawa to get breakfast sandwiches which we would eat on the train to downtown Philly. After getting off the train we were greeted by the loud city sounds and mesmerizing sights. We walked for ten minutes to meet my grandpop at the Philadelphia senior center. After my grandpop we went into the center to write a story about something exciting. And now I am just writing to fill up space on this paper so that's the end of the story. 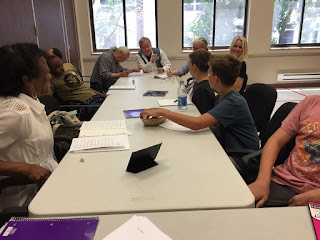 I think I'll write about today. We had flown out to Philadelphia from California the night before. Our flight was quiet and uneventful, but our cousins were delayed eight hours. We arrived and were picked up by our gradnmother I wanted to stay up and wait for our cousins to arrive, but I dozed off in minutes. I was woken by my cousin talking downstairs and I crept down and surprised him. After everyone woke up, we went to Wawa, which we don't have in California and all of us got hoagies and donuts for tomorrow's drive to the shore. We got home, and were rushed to the train station to get to grandpop's writing group. As we stepped off the train we were greeted by the sights and sounds of the city.
The amount of people was mesmerizing, and the art was beautiful, leaving the station, it only got better, the building styles of the past 200 years loomed on either side. We walked down the streets and arrived at the building and met Grandpop. As we walked in I admired the art covering the walls. And entered the class.

It was a bright sunny day in the summer of 2013 as a gust of wind rustled a pile of leaves and a child's laughter filled the air. A second later, the laughter stopped and the back wheel or a bke disappeared behind a bump seperating a cliff from the road where there had previously been a child on his bike. A few moments later a frowning mother emerged from the top of the road and began to call for their child. Then as if in answer the child's face poked over the previously mentioned bump, climbed up and ran to his mohter, the child explained what had happened to him. He explained how he had flown over the cliff, dropped his bike and run back to his mother. Unfortunately, that child was me.

I am over the moon to be here at Best Day of My Life So Far. I have been wanting to come visit for years. Why? Because my dad is Mo McCooper and I live in Los Angeles and this group does just what Benita wanted - it inspires my dad to shae his stories with us, and with his grandchildren. We read stories on the blog and we have a copy of the book on our coffee table.
Perhaps just as important, my dad has made SO many great friends at Best Day. And since he's often been called "the happiest man in the world," The Best Day of My Life So Far has been Mo's M.O. for a very long time. 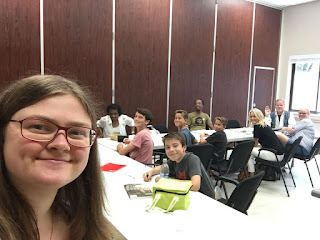