This Thursday - meet you on the bridge! 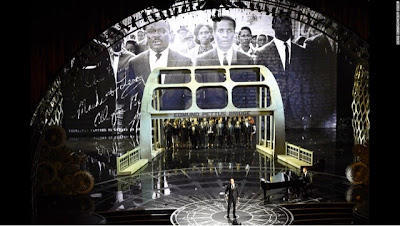 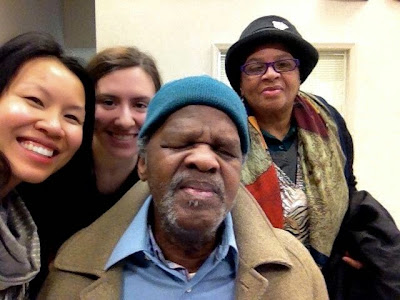 I was watching the Oscars the other night (haha I guess I am in an award season kind of mood this year... been blogging about that a couple times now) and planning for our Thursday's Black History Month event. The performance of the song "Glory", from the movie "Selma", came on, and I really was moved. I liked how they superimposed a stage set of the Edmund Pettus Bridge against historical footage of civil rights events on the bridge, and blended footage of marches with real-time walking of the singers onto the stage. I liked how they not so much brought us to the past, but brought the past out of the past and into the present, how they made history come out of its shell and become relevant. I liked how later the when the song won its award, John Legend and Common said in their acceptance speech: "This bridge was once a landmark of a divided nation, but now it’s a symbol for change. The spirit of this bridge transforms race, gender, religion, sexual orientation and social status... This bridge was built on hope, welded with compassion and elevated by love for all human beings.”

My wish for our event Thursday is that the stories you hear will fill you with the spirit of the Edmund Pettus Bridge. These stories have been written on hope, signed with compassion and elevated, by you listening, by love for all human beings. See you Thursday 1pm sharp at the Philadelphia Senior Center's Auditorium!

Here's a sneak peek at one of the stories you'll get to hear:

Previously I have written stories about the Golden Age of radio, but I’ve never written before that Black actors were often relegated to playing stereotyped roles such as porters, servants, and buffoons. There were times when they had to speak incorrect English – the more incorrect it was, the more laughs it got. One tactic that really pushed my buttons was when a Black person was offered a dollar for doing some menial work. This felt disrespectful to me as a Black man.

I would have liked to hear an interview with some of the Black actors who took these roles to see why they didn’t fight harder to play more dignified characters. However, there was one Black actor who didn’t go along with this, he would not play any part that was beneath him. His name was Canada Less. He was an activist for the betterment of the Black actor and he went to several network directors and said he would not act unless he was given proper, dignified roles. For every actor who played those undignified roles, there were people like Canada Lee who paved the way for actors like Sidney Poitier, Harry Belafonte, and even James Earl Jones and Denzel Washington. The day of the black servant or buffoon is gone, and I’m glad because to me those were not the good old days.

I also want to mention that these days Black artists are prominent in all forms of art, especially music. Who could forget Paul Robeson and Marianne Anderson? But even in the field of opera, I know of at least two black women, Leontine Price and Jessie Norman, who were very prominent and true divas.