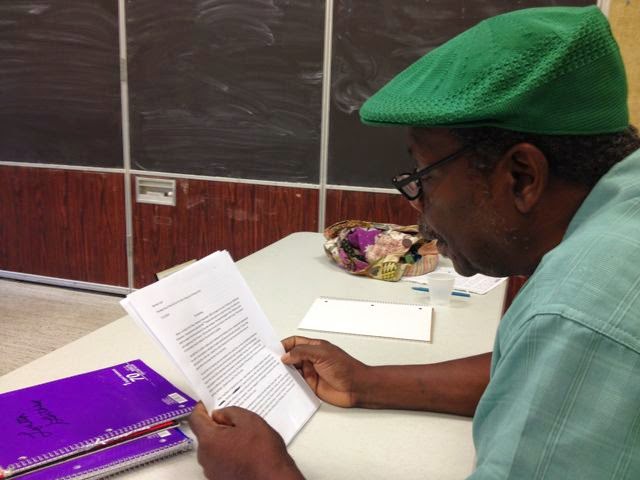 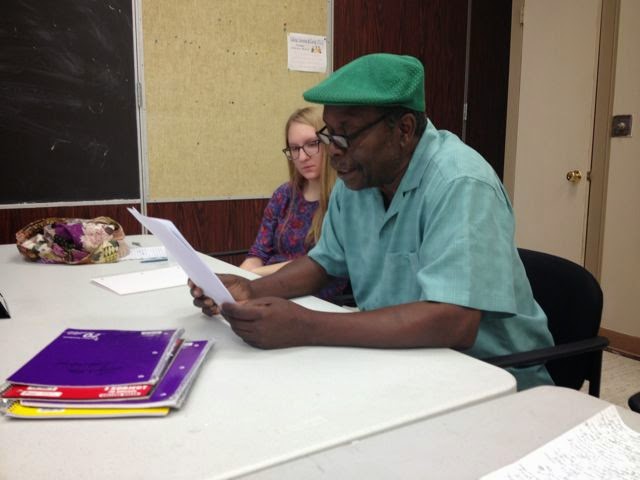 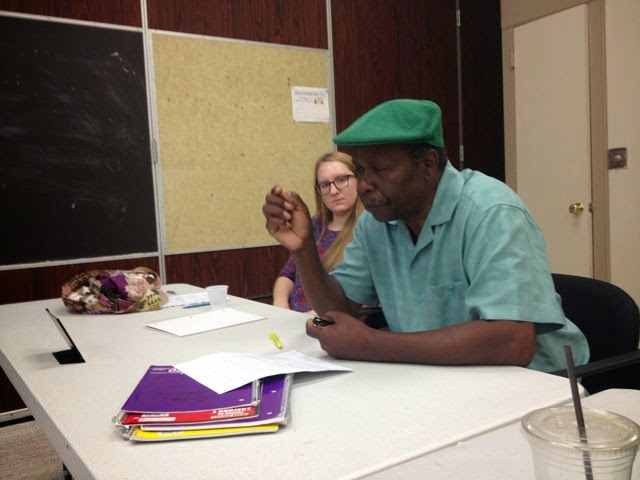 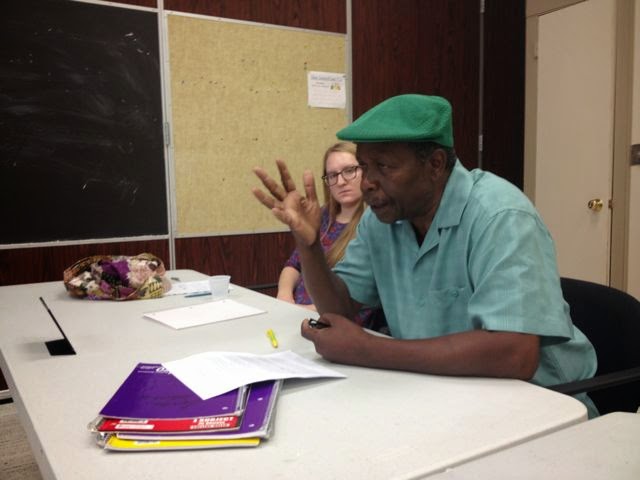 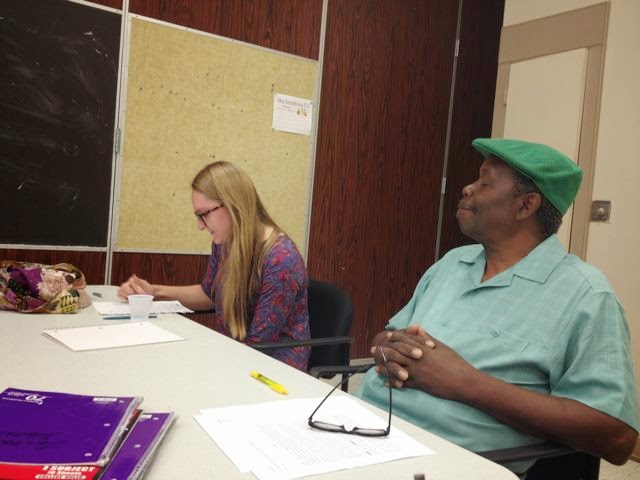 And now, here’s my bud Norman, bravely yet gently “grabbing us by the hand” on a walk through Philadelphia with two very different stories, showing us the soul and humanity that can be found even in the rougher city streets.

While I often find myself engaged in a conversation about today's wayward youth, I rarely have discussions about some of their positive deeds.

Last Saturday night, I had a positive experience with a young lady.

This experience started at approximately 11 p.m. when we departed the Number 64 bust at 28th and Grey's Ferry Avenue. Because of a detour, we had to walk five extra blocks to our destination: 27th and Reed Streets.

I do not have to tell anyone how dangerous the streets of Philadelphia are at 11 p.m.

We decided to walk together. During our journey, the young lady expressed her concerns about the Ebola outbreak in West Africa. I was impressed.

When we reached the corner of 29th and Reed Streets, the young lady exemplified the positive traits that we do not associate with young people of today.

A huge crowd milled around two young men who were arguing. My instinct was to usher the young lady out of the danger zone, but before I could react, she grabbed me by the hand and guided me across the street; thereby, showing respect for an elder, a dying tradition.

The positive encounter that I had with the young lady, that I have written about, strengthened my belief in the inherit goodness in the majority of our youth.

Note: this is not an anti-Islamic excerpt; it is a coming of age observation.

But that's what we kids were always looking for: excitement. And my street, Olive Street, was a place to come if you wanted excitement and I'll tell you why. It was a small narrow, out of the way, alley-looking street with small brick row houses. It was a dead end street. It was a hidden street where people from other neighborhoods came to do dirty stuff or just hang out.

At first to see those Nation of Islam guys walk pass the street was exciting, but after a while, it wasn't because they would give evil looks to the teenagers who would be dancing at the mouth of the street. The music came from a piccolo that was on top of a platform in front of a wooden long wide strong and narrow shotgun building, which was right next to a kind of large granite barbecue place that sold delicious barbecue sandwiches. The Islam guys didn’t like the restaurant and talked about pork, like I said, real bad.

Another exciting thing on the street was seeing the guys that played dice on the big lot on the left hand side at the end of the street being chased by police. They would be funny. They would be running through the street, like a heard of spooked cattle in one of the cowboy pictures that we saw each Saturday in the neighborhood movie house. Bills would be stuck in their pumping fists, and one of them would always have a firm grip on an opened bottle of cheap red wine.

The girls did not mind them messing up their hop scotch games and the boys didn't mind them messing up their marble games, because they could always pick up the loose change. One day, those Islam guys had the nerve to go up on the ot and preach to the crap shooters. Me and Bobby, who was my best friend, got excited. We thought that there was going to be a fight, but that didn't happen, because after a lot of arguing, the Muslim guys left.

They passed by the gang boys, but didn't say nothing to them because they knew that all those guys wanted was a fight. I mean the gang guys would fight for no reason at all and they would definitely cause excitement when they engaged in a "fair one" which meant a fair fight. They would have everybody out there looking at them and "awing" when they threw swift left hooks and straight jabs and ducked bobbed and weaved in the nick of time. Sometimes the girls or the boys or a combination of the girls and boys would harmonize. The sounds they made would go through you real sweet. We would become excited when we knew they were about to do their doo wop thing.

For a while, there wasn't too much excitement on the street. We forgot all about the Muslim guys and turned our attention to the guys dressed like cowboys and riding those pretty horses on our street and laughed when Mr. Simon, the drunk, told his corny jokes in that funny voice of his. And on Sundays, we would go around the corner to watch the Fairmount Braves, semi-pro baseball team get off their brand new touring bus. The team would be dressed in their pretty red and white uniforms. They looked sharp as they headed into the little Belmont bar that sponsored them – it was the same bar that had exciting trips for the neighborhood kids. So we forgot about the Muslim guys for a while.

The day I dreaded, Sunday, came and more people showed up for the duel then I expected. Salmon, the funny drunkard lounged in a raggedy kitchen chair, a quart of Pabst Blue Ribbon beer at his side, and on his lap, a transistor radio that had hazy reception of a baseball game between the Phillies and the negroes beloved Brooklyn Dodgers. A group of crap shooters stood in front of the lot that was there.

"Special Vegas Casino" decked out in two-toned shoes, tailored three-piece suits, crisp shirts, with golden bones for the collars and golden links for the cuffs. Wide brim hats set rakishly upon their heads.

Young boys with splintered over-the-hill baseball bats held together by weathered black tape, stood besides girls with Shirley temple hair-do's, frilly socks, and long protruding dresses. Besides them were the local territorial gang, adorned to the man with the yellow and blue reversible jackets with their name "Fabulous Kings" emblazoned on the back.

Then a guy all dressed from head to toe in cowboy clothes and riding a large white, prancing stallion showed up and rode slowly down the street, hesitating briefly several times to let children stare in admiration. Suddenly, the loud roar of a motorcycle was heard at the mouth of the street. This caused the horse to neigh and rear up on its hind legs. The children squealed with delight. The action reminded them of a cowboy movie. Around that time, a couple of members of the Fairmount Giants baseball team came on the scene, all dressed up in their red and white uniforms. You could smell Sunday dinner – fried chicken, yams and lima beans – coming out of one of the houses.

And you also got a whiff of cheap perfume on the women and Old Spice cologne on the men. Some of the little girls held dandelions to their noses. Every non-and-then somebody brushed up against somebody but nobody got mad. The water ice man happened to come by pushing his cart. Within an instant, he was surrounded by a crowd who waited impatiently for him to shave a huge block of ice with a metal instrument, place the shavings in a paper cone cup and pour thick flavoring into it.