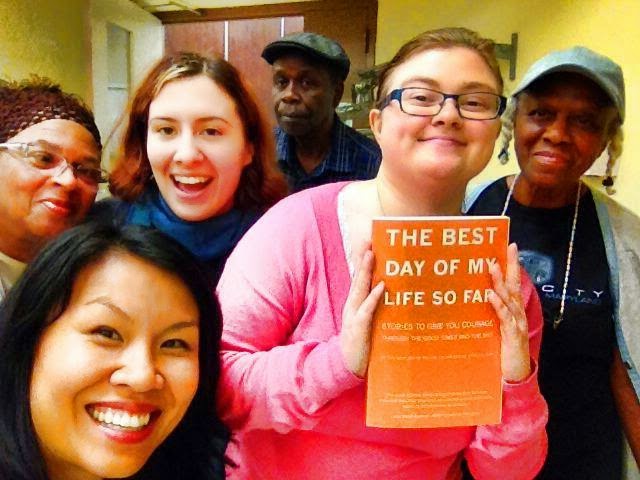 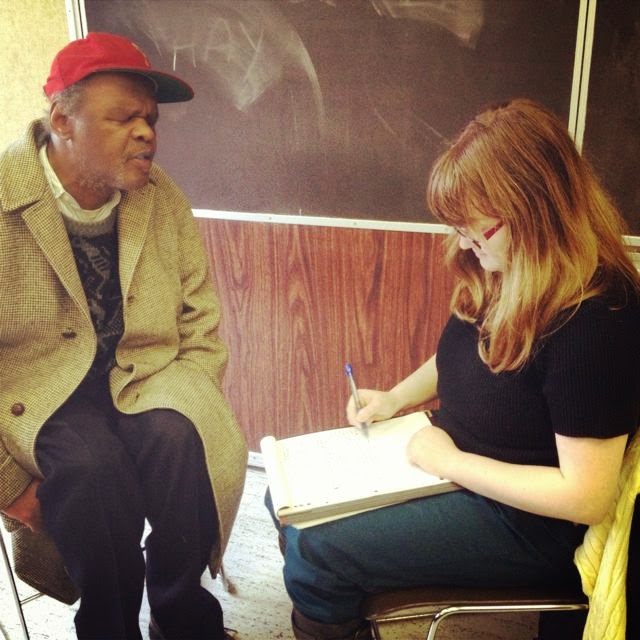 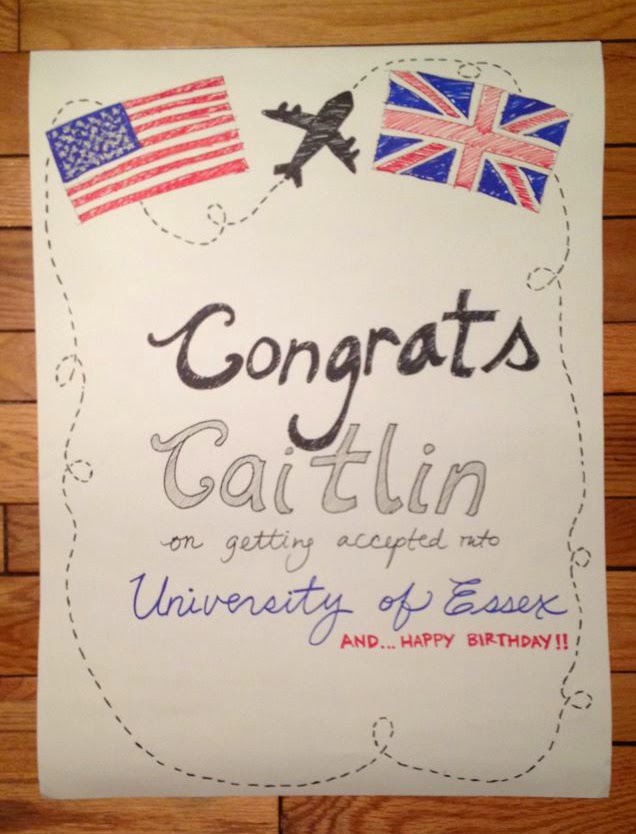 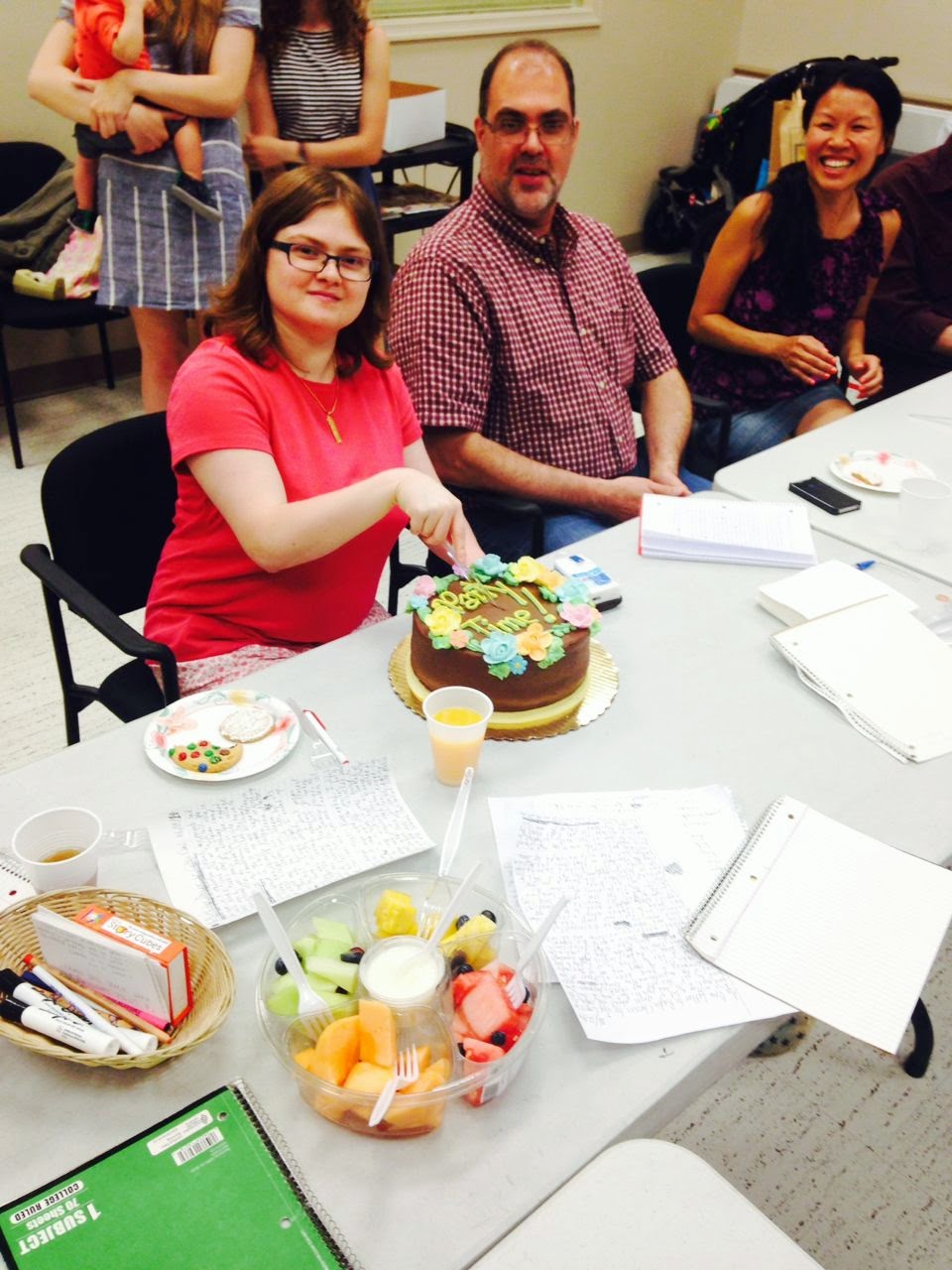 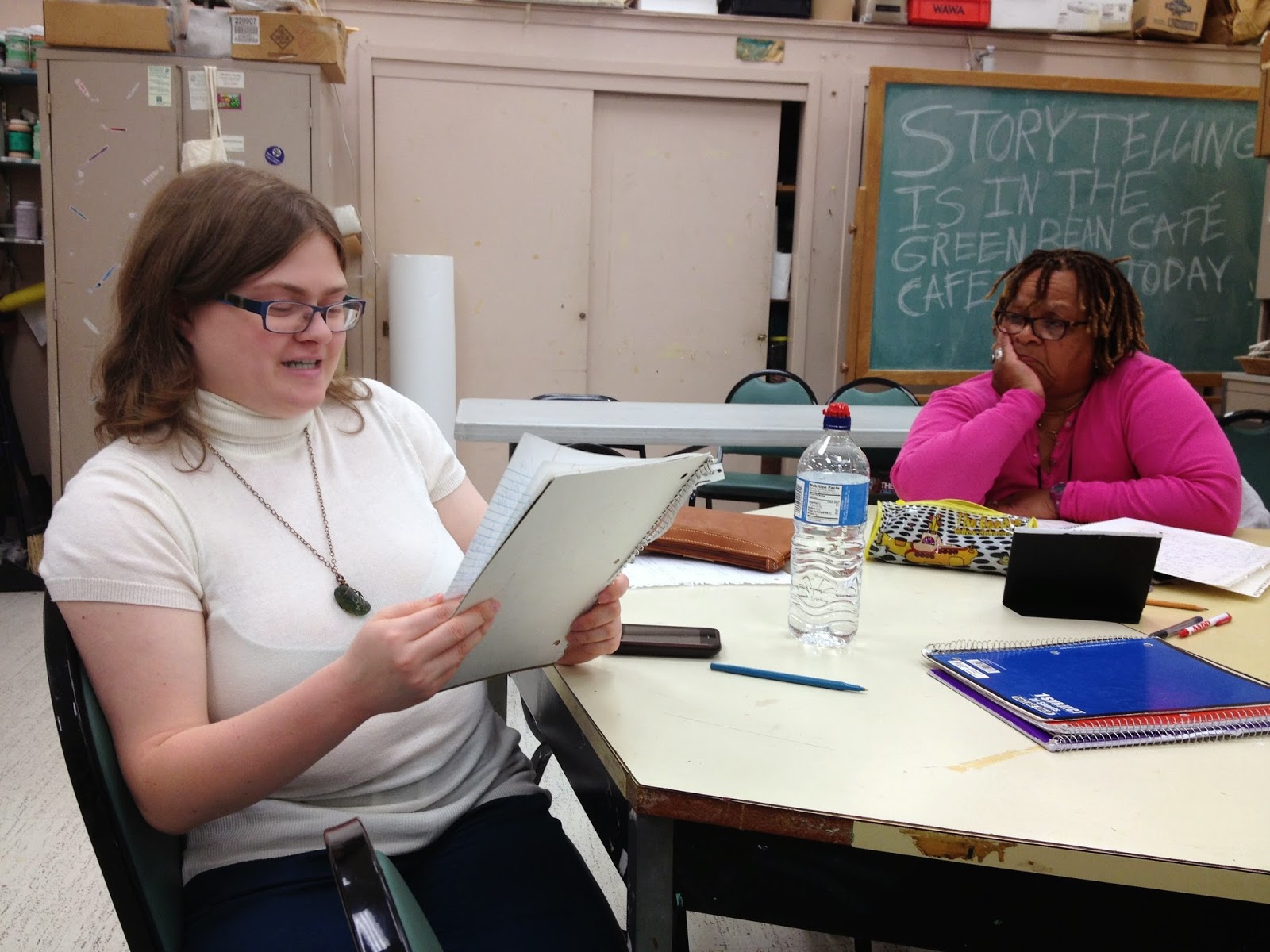 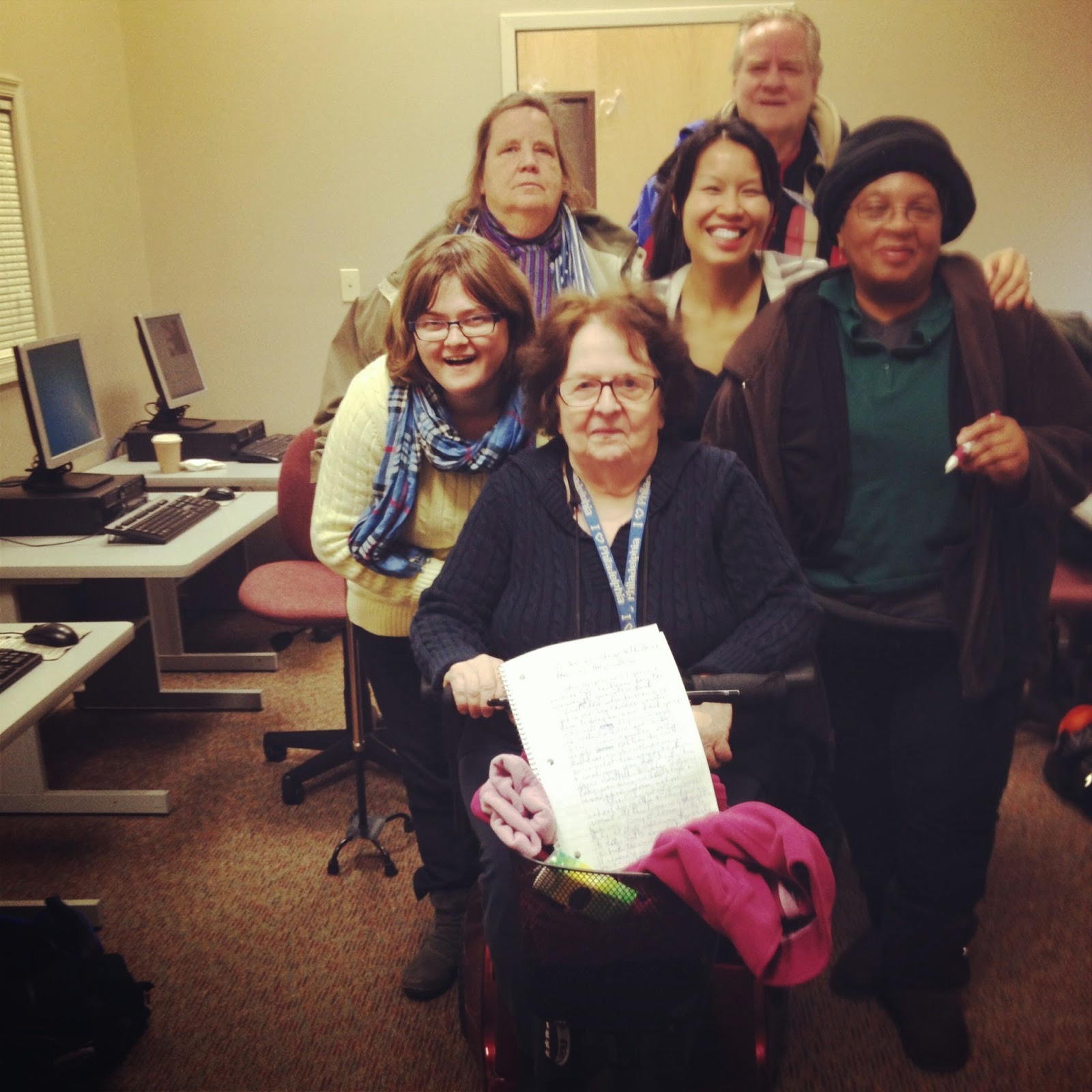 As you guys may know from our Facebook and Twitter posts, our facilitator Caitlin has been accepted to University of Essex’s playwriting program. To quote Joan our senior bud, sad for us to see her go but we’re SO HAPPY for her!! We had an early celebration months ago, and last weekend we sent her off officially. This Thursday we had another great session but it was definitely not the same without the irreplaceable, awesome through-and-through Caitlin… but here’s what’s really cool: we came up with a way for her to be there in spirit. Every session she would text us 3 sentences summarizing her week abroad. And she kicked off our new tiny tradition with these 3. Ha!!

1. Everyone has nothing but good things to say about my teacher.


3. I saw a play that was performed in a giant aluminum whale.


The last session she spent with us, she gave us all permanent smiles with the story below. I thought I would share that one with you along with two stories by Joe. Joe and Caitlin share a special bond–because he can’t see, every week he tells her his story verbally. They sit face to face off to the side of the room, away from the table where other seniors are huddled, writing. She writes it down for him word for word, and then reads it out loud for him when his turn to share comes along.

Caitlin, you’re definitely still here with us. No doubt about it. “See you” via text next Thursday ;)

I want to write this huge, beautiful tribute to all the regulars of the Philadelphia Senior Center Best Day of My Life So Far group. I’ll be leaving for a yearlong study aborad program in England on Saturday and everyone here deserves a well-written sendoff, except I am having trouble figuring out where to start. I guess the best way to do this is by saying I miss everyone. That’s the gist of what I want to write and the point I want to get to by the time this is over.

I started in 2012 when Donnell whom I worked with invited me to the group during our lunch hour. I treated it like he was the regular helping seniors with their stories, but then I ended up being the regular ghostwriter catching him up on all the things he missed.

I regularly wrote for Joe and Loretta and a few seniors I only saw once, and it was hard to pass that role on to the other volunteers, Rachel or Jana or even Benita. It felt too much like my thing. But I know Jana and Rachel and Benita and whoever else is going to ghostwrite are great writers and transcribers. Besides, that’s not the only thing I’m going to miss.

I’m going to miss seeing Norman in the computer room, typing and retuning his story before bringing it in on freshly printed paper. I’m going to miss having Hattie, Frances and Millie determining the reading order with authority and efficiency. I won’t be able to take surprise phone calls from Beatrice, record Gogo, Hattie and Joan’s spur-of-the moment stories, or make sure Elizabeth signs the attendance sheet when she come rolling in on her scooter. It’ll be hard to make sure Greta comes to performances by the Philadelphia Young Playwrights (another group I am a part of which is how I first met Donnell) and all but impossible to accept Mo’s offer for coffee across the pond. I’m going to miss all of those seniors, plus the ones who only show up occasionally, and especially the ones who can’t come anymore.

I am going to keep in touch. I’ll send texts, videos, and the occasional story. I’ll keep up with the website, the upcoming Story Pop Up event series, emails form volunteers, and baby Kian’s pictures from Benita, of course. I will definitely come in person during the holidays. But I am not going to be here in person, not with any regularity. I am going to have an entire year where Best Day isn’t who I am at the moment.

But this city is full of thousands of seniors and volunteers, and one of Best Day’s goals is to find those people who want and need to be a part of this group. The outreach is only going to get larger with the Story Pop Up project, and there are going to be a lot of new people who can say, “The Best Day of My Life SO Far is a part of who I am right now.” And in these last few days before I leave, I’m glad to have worked with the volunteers who have been able to say this for years and will be able to say this for a very long time. I’ll miss you.

*The following is a conversation overheard between senior Joe Garrison and facilitator Caitlin Cieri.

J: I’ve got another misheard lyric for you.
C: Cool! You know I love those.
J: You know that song by Celine Dion from Titanic. It sounds like she’s singing, “I believe that the hot dogs go on!” I can just imagine those hot dogs sinking away!
C: Yeah! I can just see a bunch of hot dogs jumping and slithering away and Celine’s like, “No! Don’t go hot dogs! I’m still hungry!”
J: And you remember Neil Diamond’s song “Reverend Blue-Jeans?” And Elton John in “Kiki Dee?” I always thought he sang, “I’ve got your heart in a sock.”

There’s something I’ve been thinking of, these observances of what I’ve seen over the years in movies and television. Most of them believe it or not are from Western movies. I love other films too, but the Westerns seem to have the most clichés. The scenes I think are the most senseless, the most non-sensical, are the ones where two guys are sitting in a saloon. One guy would offer to buy the other guy a drink. He refuses, then the first guy says, “What are you, too good to drink with me?” And sometimes a gun fight starts. But these films, they’ll have gunfights over anything. Another one is how at the beginning of the movie the girl always mistakes the hero for a bandit or a lowlife and at the end of the movie she’ll apologize. He’ll always say: “Forget it.” Forget it, every time, no matter how badly he’s been mistreated. That’s not how it works in real life. I know that’s not how it works in real life! If someone feels mistreated and other people think they can fix it all by saying “sorry” they’re gonna stay upset for a while.

The reason why I’m writing this is to show that we really haven’t come that far. You still see these clichés in Westerns today! And there’s even worse clichés about us seniors on television and in the cinema! This just goes to show you that just because you see something on the screen doesn’t mean it’s right.