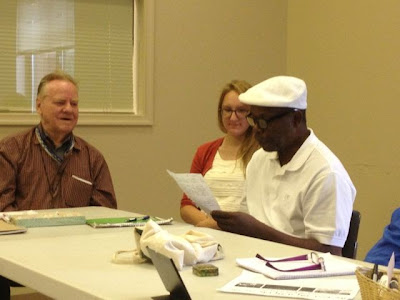 Today in class, we took a vote among ourselves, and decided to chill out and play hooky from our usual writing-and-reading routine.  And just talk. Free style. We started talking about junior high best friends, then about all of us girls (Hattie, Brenda, Joan, me) who grew up as semi-tomboys and ended up hanging with the boys, and then about girls and boys in general, and special friends in our lives in general. It was really nice. The weather outside was sunny but breezy, and so was our conversation.

When I got back home to my laptop, and browsed through our seniors’ recent stories to see what to post today, I couldn’t help myself. An easy, breezy preteen story of course! Bow ribbons and stick balls may sound vintage, but I’m placing a bet right here and now that Norman’s story about how preteen boys and girls act towards each other will never go out of style!

During the adolescent stages of my life, the boys and girls in my neighborhood led separate lives.

The girls had their jacks, hop scotch, jumpy ropes, hand clapping games, and passion for dressy paper dolls while boys had marbles, yo-yo’s, stick balls, Wayans and well hidden wrenches that were used to turn on the fire hydrant as quickly as the police could turn them off.

The adolescent boys and girls simply led different lives. They avoided one another like a deadly plaque and encounters would often bring forth an overly emphasized “ugggh.”

There, however, were periods when co-existence was tolerated creating snowmen and taking to the streets with sleds; birthday parties consisting of games like Pin the Tail on the Donkey, musical chairs, “and would you believe it” spin the bottle were times for unity between the boys and the girls.

When there was a neighborhood outing chaperoned by older kids or adults there was no problems between the boys and girls. We knew better then to act out on ferry rides to Camden, New Jersey or trips to Citizen’s Bank to see the Phillies against the Dodgers.

Occasionally, we would call a truce and create a club. We would elect a President, Vice President, Treasurer, and Secretary conducted meetings for two or three weeks, decide to have a luncheon that would consist of bologna and cheese sandwiches, kool aide, potato chips and cookies. Always after the party, the club would unofficially be discontinued with the option of continuing again at a later date.

We would then go back to our separate lives, a phenomenon that would continue until our pre-teens when we would discover each other and then for the rest of our lives our lives would no longer be separate.
Newer Post Older Post Home