Hazel (Power) - A Dedication to Boston 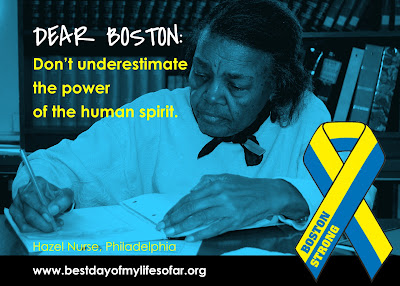 Every so often, moments come by to sweep us off our feet to remind us of the magnitude of life. Last week was one of those moments, stretched out over the course of a week in Boston, the city I called home for 4 years. Through tragedy, and the triumph over tragedy, we all witnessed the power of the human spirit. I was reminded of a sentence Hazel shared in a story: "Don't underestimate the power of the human spirit."

Originally we shared the story Here in September 2010, but it's got to be shared again. I feel like this story may help us heal. Boston, today we dedicate this story to you.


Coming up next, a full collection of stories about another special city, Philadelphia - inspired by recent conversations that our seniors had with college students around the country.
Newer Post Older Post Home