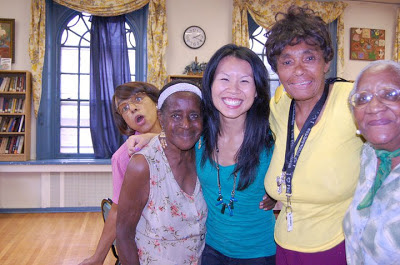 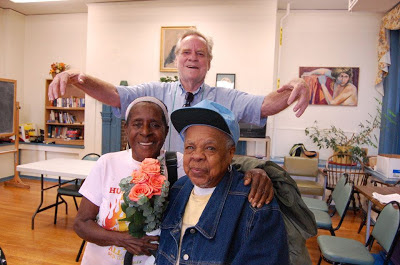 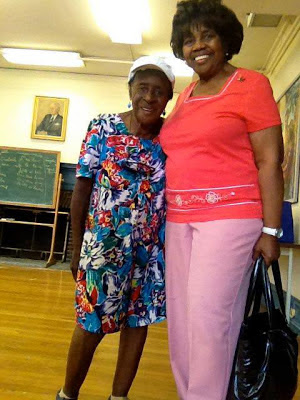 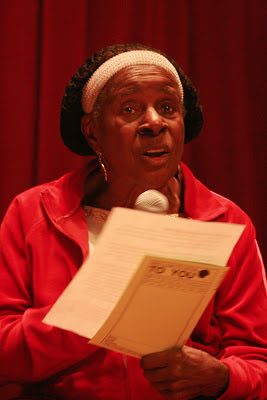 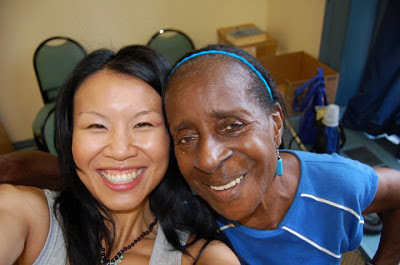 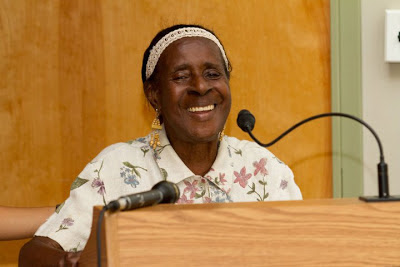 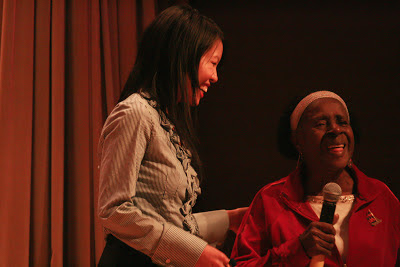 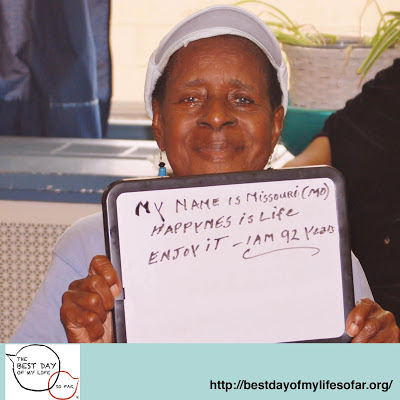 Hi Readers, I have some very sad news to share. A core member of our class passed away in her sleep a few days after Christmas. "Lil Miss Mo" Missouri Grier was so bright and vibrant all the way to her last days. She was 92 but you could never tell because she always moved about and lived out loud like she was in her 60s. In her later days, she used a cane but it never slowed her down. If you have been to some of our events such as Seniors’ Storytelling Day in 2010 and Our Best Day So Far launch party in 2011, you might remember seeing her. She has been a part of our family for years.

She was one of the seniors who would stay behind after class to give me advice in our group's early days, when I didn't know how to handle all the mental health issues of newer individuals when the group first started getting bigger. She would tell me not to be overwhelmed and to focus on telling and sharing stories, and the individuals' mental health issues would resolve themselves in the comfort of the group. And they did.

She was never a passive bystander. She helped me make sure the group's atmosphere always felt right. She was a doer and fighter. And for me to see the spirit of a fighter in someone so tiny and so old is something really spectacular and inspiring. The seniors actually call her our group's security guard, because even though she was thin and under five feet tall, she would always protect the group, like if our room got switched at the last minute because an event needed our space or the room wasn't set up right - she would dash right to the senior center staff to report and fix the problem so I could run the class.

Sorry for the sad news. The seniors handled this well and and they were actually the ones who broke the news to me - gently. Over the years they have trained me to handle this kind of news more calmly, but I know it is always hard for us all to hear this. It is beautiful actually how the seniors discuss death. It is appropriately bitter but really somehow sweet and focused on life.

Our teen intern Madi has collected some of Miss Mo’s happiest photos and funniest stories (she always had a way of tackling the most serious issues in funny little story nuggets) here. I hope you would all join our senior buds, Madi and me in honoring and remembering our Lil Miss Mo.

All my best, Benita

My buddy, her mother, and I went bay fishing, down in Jersey.  We rented a boat from the boathouse.  As the tide was coming up, there also was a strong wind with it.  Mother was the first one to get a bite.  Just as she was bringing it in, she was so happy about it, she could not stop laughing.  All of a sudden her wig fell into the ocean and we no longer were fishing for fish and started fishing for the wig.  Half and hour later I had a bite.  It was the wig.

If you try and don’t win the race, don’t give up.
A start is better than a non-start.
When things come out the way you want them to.
Life is not what you want but what you make of it.
You got the tools for success.  Use them.

I had a job at a beauty shop where my sister used to get her hair dressed. My father did not like girls and ladies getting their hair cut. In his world, only men did that. My sister got hers cut and he was very angry but said to her, she was a grown-up.

She suggested it was time I started to take an interest in how I should look as a teenager so she started me there to get my hair done. This went on for a year. One day she said, “Are you going to get your hair done today?” She gave me money to get it done, but did not say anything about cutting. I lied, told the hairdresser she said I could get my hair cut. I sat at the dinner table with a triangle on my head from Monday to Friday. My father looked at me and wanted to know why I kept my head covered, reached over and took the hair net asking “Where is your hair?” Answer: Upstairs. “Why is your hair up there?” I got it cut. He was so mad. He said I will never buy you anymore hats. At 14 years, who cared. Mother said let it alone, it will grow back.

I was 11 years old when I wanted to bake a pie.  It was my father’s birthday and I wanted to surprise him.  I found the cookbook and started to read hot to do it.  My cousin wanted to help – bad choice.  We put too much salt in the mixture and no one could eat it but my dad ate his slice and said, “If you never try, you will never succeed”.

My mother told me to go OUTSIDE and sit on the front steps.  I was told not to get off the steps.  Sitting there with nothing to do, I was thinking what to do.  Something to do while sitting there.

My father was asleep on the living room floor.  The only thing I could do was play tricks on him, so I went into the house, got my jump rope, tied one end to the sofa, the other to his foot, went outside, rang the bell.

He tried to get up and could not.  It was funny to me but not to him.  He was angry but I did not get punished.  My mother stepped in—SAVED.

Mother sent me upstairs to get her pocketbook which was on the bureau, my father’s car keys were there too. Got the bag and the car keys. Mother sent me to the store. Instead of going, I went to the garage across from the store and got in my father’s car. Started the engine and the car started to roll and I could not stop it – I went through the door slowly. Not getting hurt. A man was coming down the street and saw the car rolling slowly out the door. He ran up to the car, thinking no one was in the car and found me behind the wheel. He got me out of the way and stopped the engine. Tell your father to check his brakes.