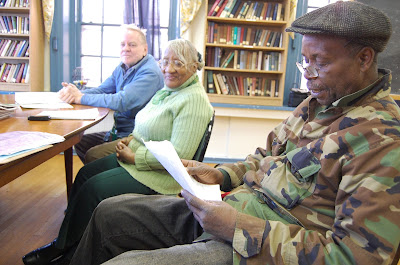 Happy 2012! And now, a toast to the new year and new friendships!

Norman is a newer member of our class and this is something he wrote about Mo, whom as you know has been a core member of our class for a few years now. The day Norman wrote the story, Mo happened to be absent from class, so Norman reread the story out loud the week later when Mo was back, for the group to hear again, and for Mo to hear for the first time. I squealed when Norman started reading and leaned over the table so I could watch Mo’s expression – he was sitting a few chairs to my right, I can still remember that. It took him a minute to realize the entire story was a dedication to him. He was so surprised. He started smiling, the group cheered, the smiles and cheers spread and grew. At the end of the story, the men exchanged a knowing look across the room. One conversation, one story, one look, and there it is, a friendship that is fresh and new and strong and manly yet delicate and beautiful and ready to take on the world.

Happy new year to everyone of you reading this right now. Thank you for everything. Thank you for lending us your ear and in that way, being very much a true friend.

Last week was the second time that I came to the writer’s group.  I read an excerpt about youth high society in the 50’s.

I heard beautiful stories and poetry.  At the end of the session, I became engrossed in an hour and a half discussion with a veteran member of the writing group: Mo McCooper.

Our conversation started with a discussion on class lines in Phila in the 50’s; but moved quickly to a subject that we both love, the evolution of basketball in Phila.

We were able to identify and tell personal tales about the players from the city during the late 50’s through the 70’s.  At that time, the sport was not as lucrative and popular as it is now.  There were not more than 10 or 12 NBA teams as opposed to the 32 teams that now comprise the NBA.

Million dollar players would not be on strike, as they are during the period of this writing.  These players from yesteryear that Mo and I discussed would have been professionals, not club or semi-pro players; the time was not right.

Mo was an oral history archive on the state of basketball in Phila fifty years ago.  His testimony was appreciated, as I have been researching the subject for some years.  He had personal stories about Wilt Chamberlain, Sonny Hill and a host of other legendary players from the era we’ve been talking about.  There were other players that we discussed that have been lost in time.

I am looking forward to coming back to the writer’s group, speaking with Mo and everyone else present.