The Day Words Came Tumbling Out

For a while, it was as though the wide-lined notebooks that I hand out before every class were the seniors' safety nets. They felt better thinking before they wrote and writing before they read out loud. It seemed that way at least. I used to see more crossed-out words on their pages, like they were mulling over sentence structure and grammar behind the scenes before their stories came out in the verbal spotlight. But sometime between then and today, something changed. Today, after getting a paragraph out on paper, one by one they let go of their pens and just started speaking. First a quick thought, then a couple sentences, and then words came tumbling out of the their lips. They said things out of sequence and didn't mind, they changed their own subjects and didn't worry about where the stories were headed. Even when they read, their interrupted their own writings with tangential little subplots. Helen spoke tenderly, Hattie spoke warmly, Bernice spoke rapidly, Mozell who is hard of hearing listened and nodded when she was excited about something. There was a lot of laughing (that was Bernice's doing - she was talking about racism in the 50s but even in her fury she was hilarious) and some crying (that was Helen's doing - before she started talking Hattie joked, "Let me get out my handkerchief first,"  because it's a proven fact: things Helen says are always, always touching.)  Our class went half an hour overtime but we stayed around to look at Bernice's pictures (this tiny but thick stack) that she carries in her purse, and then I took a picture of them and Hattie took a picture of us. (By the way, sorry the picture is fuzzy. My fault not hers. I didn't set the camera right before I gave it to her.) Standing next to me, with that white daisy pinned to her hat, Helen turned to me and said, "You know, I am really enjoying the class. I love being here." And I guess that right there was when I could use a handkerchief too. 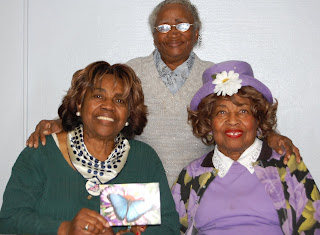