And This is How We Party 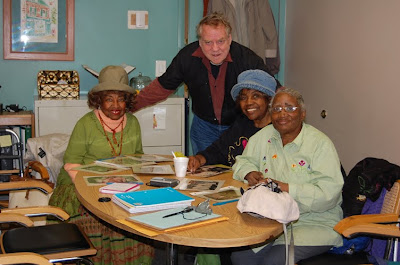 Class is getting more and more amazing. Apparently, the nasty early autumn rain outside couldn't stop our party inside. That's right. The seniors have started to call our class a party - their word, not mine!  (Later, when my husband heard the tape recording of the class, he agreed: "You guys are rowdier than I thought.")

Before I get into a full recap as usual, I want to sneak a highlight in here - can't keep this from you any longer ... I "unveiled" the blog to the seniors for the first time, and they were so beyond happy. I said whoever was done with their in-class writing assignment could come to the computer to see a surprise. You should have seen the sizes of their eyes. One by one the seniors made their way from the table to the computer desk. After they settled in the cushy seat and pivoted around to face the screen, I simply scrolled the blog to something they had written, and asked, "See? Remember writing this in class?" With some confusion, their eyes would scan the computer screen. It took them a while to realize what was happening, and then suddenly they just got it - they fully comprehended it without me having to explain anything. And then they would just look up at me (I was standing up) like little kids who just had seen the most magical thing.

Helen who tells perfect stories and speaks in perfect sentences told me, "This is perfect. My son, he is in New Hampshire you know, has been asking me what I've been writing in this class. And it's hard to explain. I was thinking of making photocopies to send him and my seven grandkids, but now they can go all on the computer and see." I asked her where her grandkids live, and they are spread all over the place - two in West Chester in PA, and one each in New Jersey, Vermont, Virginia, Chicago, New Hampshire.

Here are some of the seniors checking out their very own blog. Of course Bernice our favorite comedian actually posed with her hands on the keyboard to look like she was busy blogging and just so happened to be caught in a snapshot. 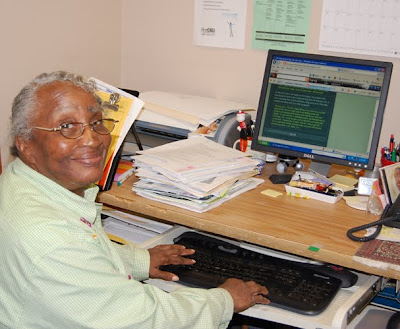 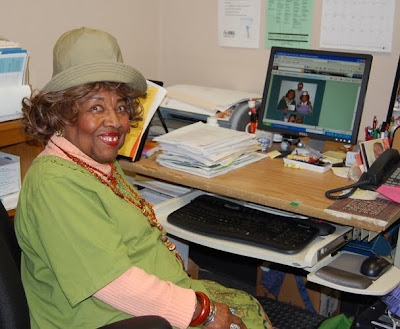 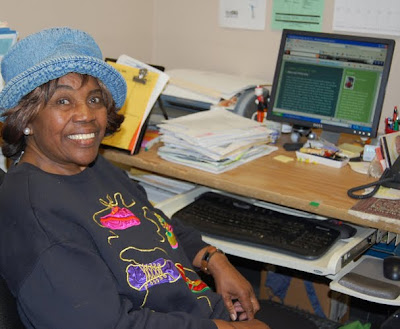 The moment I knew it was going to be a good day was when I saw Bernice in the hallway before class. She spotted me first and said out loud, "That's my girl!" Everyone heard - the hallway instantly turned into a burst of laughter. I was a little embarrassed by the attention but in a sweetened-up way.

As everyone funneled into our small classroom, chatting began. More than I could ever remember in previous classes. And for the first time, they asked to find out more about me, and not just related to writing. They wanted me to list every place I've lived. So I said, Seattle, Hong Kong, Seattle again, Boston, Philadelphia, oh, and Mexico and Rome. Immediately the group went ga ga over Rome. And of course Rome led to questions about whether I am married. I showed them my rings and pictures of my husband on my phone, and they went ga ga over him. They called him a movie star. We chatted for a while like that. I wasn't watching the clock. The mood was too nice.

Meanwhile, Hattie said, "I brought something to show you." She took out a huge pile of photo pages (the thick kind that you can take in and out of three-ring albums with peel-off plastics on top.) Now that was what got the group really rowdy. Bernice kept saying, "Hot Dog! Hot Dog!" I took that to be her way of saying "Goodlooking! Goodlooking!" Hattie showed us her sisters through the years, her parents, and of course her legendary grandmother. And then the picture that she had told us about last week, about being on the train when she was three, that picture, she held in her hands, and we all knew immediately what the picture was of. We nodded and laughed. Helen at seventy-six laughing out loud in a colorful sweatshirt and holding a black-and-white picture of Helen at three. Now that is a mental picture that will last forever in my mind.

After more goofing off, we settled down again. I thought I would give them individual writing assignments rather than ask them all to do the same thing. By now it was clear what each senior cares about because every week their stories returned to those things. For Bernice who had been writing mainly about life during the war, I thought she could write about after the war. For Hattie, I thought she could tell us more about her grandmother. For Mo McCooper (Ok, if this name sounds fake, it is! This is our new student Xxxx's secret pen name... the first pen name in our little class. And I promised him that's what I would refer to him as on this blog. No joke - he started with my married name "Cooper" and then added "Mo", and then added "Mc.") Anyway, for him,  I thought he could tell us something he had never told anymore. He seems like the kind who likes a more abstract challenge. And for Helen, I was just about to suggest writing about her kids growing up, when she said, "Last night I wrote about my son Trevor growing up."