Something I've Got to Ask - Continued

The "Something I've Got to Ask"mystery evolves around the same portrait that Bernice (a) compulsively draws and (b) inexplicably hands to me class after class. I tried to play it cool and not ask for several weeks but it'd been driving me crazy. I had to get to the bottom of it.

Last week, I told the group whoever finished writing could check out this blog, and it came to Bernice's turn. I was standing next to her at the computer, just scrolling through for her, when she spotted her own drawings.

"Ha! That's cool! You put these pictures in there?"

"Yes. You always draw the same person - who's that?"

"Oh, that? That's no one in particular. Just someone in my mind. She's in my mind."

No one in particular? And yes, I believe her 100%. I just don't know how something so unreal can be so permanent in her mind. I was left feeling more mystified than before I asked.

We looked at some more posts together. When we got to her story about "black and white" grits and "black and white "soldiers, she laughed and said, "That's so funny," to which I said, "I know, because you were the one who told them!"

And then, of course, after rejoining the group at the table, Bernice immediately got to work at her next portrait and yet again, even more inexplicably than ever, simply handed it straight to me. 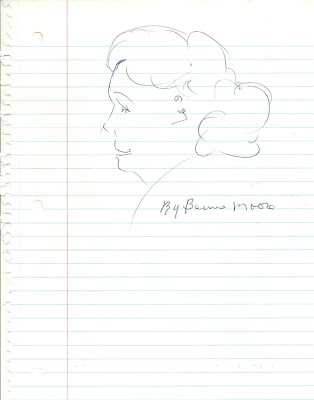