It's the beginning of Philadelphia Theatre Week! A week devoted to showing off all the cool new plays our city has to offer. To celebrate, we have stories from some of our favorite theatre buffs:

I was plucked out of obscurity at age 14 when I got the lead role in our high school musical. I was a pretty shy girl, not too confident. I had recently emerged from an awkward stage of pimples, frizzy hair, orthopedic shoes and being dumped by my best friend. I was already an accomplished musician and had been taking singing lessons with Mrs. Rutledge for a few years. I heard about auditions for Ice Pool, an original Canadian musical. I chose the song, “As long As He Needs Me” and used it numerous times over the years after that for auditions. I remember getting out on the stage and feeling confident. I sounded good! But still I was shocked when I got the part: Heather, the romantic lead. I had never acted before but learned my lines diligently.
But ugh—as the romantic lead I had to kiss Murray Balshin at the end when we overcame all obstacles to our love. He was a nerdy guy, definitely not someone I wanted to kiss. We were coached to place our lips just to the side of each other’s. Very antiseptic.
It was all pretty heady stuff! I was called out of my 10th grade class numerous times for rehearsals. I became well known in the school. I also lost my baby fat and became svelte. No time to eat. People complimented me on my new thinness. This started my years of obsession with food and being thin. In those days, most eating disorders didn’t have a name. Later I learned I was a binge eater—binging and starving, that is another whole story. Ice Pool was a success. An LP recording was made of the performance. I have no photos since I lost my high school yearbook. I was angry with my parents when we moved at the end of that year. My fame faded. The new school did not perform musicals. The year of Ice Pool was a watershed moment for me! 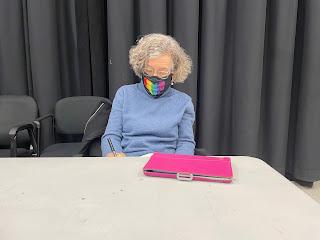 Recently a friend and I bought tickets to see a play depicting the life of Marvin Gaye. We live in different parts of the city. She in the west of the city and I live in the south, Center City. We agreed to meet at the theater for the performance at 3:00 pm. I arrived about 2:30-2:45 pm and she was not there. A notice on the window stated the performance had been cancelled. My reaction was a disappointed one. A couple from New Jersey had driven over and we expressed our disappointment. One of the ladies said she did not get a notice of the cancellation. I recalled getting a series of calls that I did not recognized, so I did not answer, my rule if I don’t know or recognize the number and no voice mail is left, my assumption is that it is probably a scam or robocall. On reflection, it was probably a call to let me know the play was cancelled. We who were wondering why stayed for a short time went to the box office for a receipt and was informed that the amount of the tickets had been returned to my account. I took a bus and returned home.
Assuming that my friend who is always early had read the notice and was on her way home. She does not have a cell phone, so I could not check that she was now home or on her way there.
When I finally was able to get her she informed me that she arrived after I left and remained in the area until 3:30pm. I asked why she stayed after she knew the production was cancelled and after the time it was past the register time of 3:00 she stated that she was waiting on me.
I said we will agree that if any future events that we were to see cancelled. Then we would leave and for her to consider an inexpensive cellphone so we could connect with each other.
She arrived later than usual she told me, because the driver carried her two blocks from her stop and not being a fast walker, it was necessary to retrace the two blocks where she wanted to catch the next bus. I now will try to think about other ways to be sure we are on the same wave length. 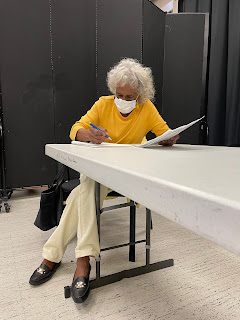 I’m Not Going to Have a Sad Day

Well basically next Wednesday, October 14, would be six years that mother went to be with the Lord, and so I’ve decided to celebrate this year with things we did that were fun. I’m going to try to put in my heart that I’m not going to have a sad day. Why would I have a sad day? I want to remember my mom and I want to remember the fun things we did. And one thing she loved to do was to travel. We spent a lot of time in New York. She also loved plays, Broadway plays. So she said, “Denise we gotta get a ticket to Lion King.” I said, “Okay, sure.”
So I bought a ticket to Lion King in New York and we stayed at the Hilton Town Square because we arrived in the afternoon, we had lunch, and the play was at night. So she really truly enjoyed the Lion King, the music, particularly the song ‘He Lives in Us.’ She was singing it over and over and over and over. She saw that song from a very spiritual point of view. And another play we enjoyed was Aida. She loved Aida. Aida was very different. We did see that here in Philadelphia. I think it was Walnut Street if I’m not mistaken. Then we saw Beauty and the Beast. She enjoyed Beauty and the Beast. We also saw concerts such as there was a lady could sing like Mahalia Jackson, and so the play, I think it was called ‘Mahalia,’ so we went to see that in person. James Cleveland was another gospel singer that she loved and I loved. We went to see that play. We also saw most of the plays in Lancaster, PA. Lancaster, PA Sight and Sound Theater, that has religious plays based on the Bible, so we enjoyed those plays too. But, next Wednesday is the anniversary, it will be six years.
One thing we did, I’m originally from West Philadelphia, and when I was a young lady, about six or eight, a little girl, we would go to a place called a Jamaica Inn in West Philadelphia. There we would have my favorite meal, which was egg foo young. While dining there, I would hear in the background Diana Ross’ music. Diana Ross for example the song ‘You Can’t Hurry Love’ and that era. Diana Ross- I mean the Supremes. That was before she became Diana Ross. So, I decided, long story short, to recreate next week. I want to have egg foo young, and play Diana Ross on YouTube and then maybe play some of the music from the showtunes of Lion King, Beauty and the Beast, et cetera and Aida of course. And I thought I would remember her in a way that was uplifting and just kind of recreate some the things that we did and enjoy. And I guess that’s what I love about my mother. She was always going to, I mean she always took me to Ice Follies when Ice Follies were popular, a circus when a circus was in town. Whatever was in town, or the zoo, of course we went there a million times, but whatever was in town or a play or some cultural event, my mother would be sure to take me. And I enjoyed that part of her, and that’s the part of I want to recreate next Wednesday, God willing. That’s all. 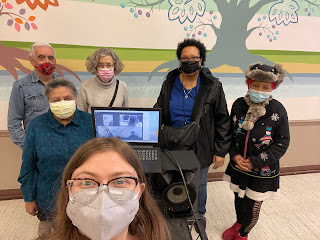 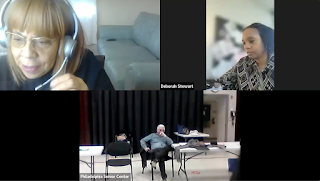