In the Meantime (Norman & Frances)

It's getting close to the 1st anniversary of the COVID lockdown in Philadelphia. Back when we first started, we couldn't imagine how could live without restaurants, movie theaters, vacations, or haircuts. And while many of us cheated in little or not-so-little ways, we also made do with the restrictions we had. We socialized on Zoom, watched livestreams and watch parties, color coordinated our masks, cleaned our houses, and baked a lot of bread. Whether we worked from home, worked in public, or didn't work at all, we lived through a world we never thought we could. Today's post looks back at older buds getting into the swing of things, during a period when lockdowns and social distancing shifted from an unbelievable nightmare to a ho-hum routine.

Finally, because of the benevolence of my Drexel Group, entitled the Writers Room, that I’ve been involved with for 6 years, they gave me a Chromebook. So that’s very good because now when I get to learning how to really use it I’ll be able to send material in and I’ll be able to get into where I can be seen during these sessions. Because I’ve been utilizing my phone and during the week I would have sometimes as many as 7 different sessions with all of the groups I belong to.
Of course, there’s the Best Day session and with my church there’s a Bible study and there’s also the church study. And then we have a meeting with my Writer’s Room from Drexel every Friday for about an hour and a half and we are given subjects that they want us to write on. Also, with Writer’s Room for the last 2 months they’ve had a monthly, about an hour and a half per week, on two different areas of writing. Four weeks of poetry and four weeks of literature.
Now I really appreciate what the Writer’s Room did for me because I was about ready to get a computer anyway because I had saved up some money. Not only did they give me the computer, but they walked through, via just Zoom, how to set it up and how to do certain kinds of things.
Now last Friday I actually went into the first Zoom meeting. It was 16 of us and that was the last meeting until September. They may have a few more meetings so we can stay together. I was really amazed because we had 16 folk there. When I finally got on and I saw myself I said, “Hey Norm you need that shave and haircut buddy.” It was very interesting and it’s new. It was a new thing with the technology. I was going to try to get on, so I could be seen today, but I got into conversation with a fellow and I was kind of late getting on. So that’s my story and I’m very happy about it, and I’m going to ask Caitlin to send me her email address or some kind of way that I could start sending stories in. So that’s my little story for today. Thank you.

Tell It to the Judge

I was going to talk about when I first started quarantine in March the 20th and I thought it was only going to be for a week or so, and then when it went to month I said okay, I’ll do some chores around the house and I picked up some books to read that I had bought and never read. So this went on and on until I finally decided that I was going to be in the house for a while and there was no let up in sight, so I started to declutter and did the other things. And then finally, I’m not big on TV and I don’t have Netflix so one day I just happened to scroll around and I saw some judge kind of show. So the last time I saw it, it’s really an experience, so if you’ve never seen one you really should treat yourself. So one of the shows I’m going to tell about is this young woman had met a guy on one of these social media things and they were going to meet and apparently they both had an interest in cooking so they were going to a cooking class. So she said she got all dressed up and she had received the information that said dress casually. So she was going to meet this guy for the first time because all of their communication had been done on social media. So she showed up with a new dress and some suede shoes and they were heels. What she was suing for was during the cooking event, this guy was swirling his pan and some of the grease or whatever got on her shoes and she said they cost $700, so the judge wanted to know why would you wear those shoes and she said well they said comfortable and you know she wore those heels all the time so they were comfortable. So in the end of the program the judge said, “Well no one would expect you to wear suede shoes and heels,” and she kept contending that was comfortable for her and she had on some during trial. So the judge finally awarded her $250 because she felt like she was partly to blame for it, so the guy lost, and she wanted $700. My feeling was after the judge made the decision which I had no part in I said I wouldn’t have awarded her anything, because if someone showed up to a cooking class with suede shoes that cost $700, so she had no receipts to show she had even had it. So then I had watched another show with a similar kind of thing where people had borrowed money and then they said, “Oh, it was a gift”, so it was entertaining to me but I hate that I had to watch that most of the time. But that was uplifting in a way that I had never experienced it before.
I think it was the one that’s called ‘The Verdict’ and her last name is Hatchett I believe. My son and daughter, both grown up living in California and they love Judge Judy because she goes right to the courts. You know this judge, she listens and she comments. Judge Judy doesn’t listen to any of that. She wants to know what you did. Judge Judy when I’ve seen her- she can be quite insulting. She’ll say your elevator doesn’t go to the 13th floor- any kind of remark. And that’s what my son says he enjoys because she doesn’t go through. If you have a contract you have to show it to her. You can’t just come in and say, because she would never have rewarded that woman because she had no bills for the shoes and if you were not too smart to wear suede $700 shoes if she paid that much for it to a cooking class.
That’s how I got through some of the days.

If you want to transcribe for Best Day, then email us at info@bestdayofmylifesofar.org. You can also share our older buds' adventures by donating to Best Day, subscribing to our newsletter, sending a note to our older buds, or following us on Facebook, Instagram, and Twitter. And if you or the older buds you know have stories about changing routines, then you or they can submit stories through our portal right here. We're especially interested to stories from Black older buds, but we're always looking for stories from older buds of color, older buds with disabilities, LGBTQIA+ older buds, older buds of any gender or sex, older buds of any religion, and older buds who just plain break the mold.
And don't forget to maintain contact with the older buds in your life. If you can't be there in person, please call them, email them, or message them on social media. And if they're using teleconferencing or remote events for the first time, give them a call and help them set things up. Check in on them to see how well they're getting used to these programs. Buy them a computer or an internet package if they don't have one of their own. It's a human right, after all. 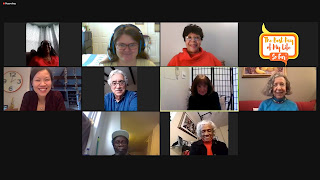