Here's to You (Frances)

I’m talking this opportunity to talk about our older bud Frances. Last week I came down with a bad chest cold, and I had to take the week off. I’m the only facilitator at the Philadelphia Senior Center’s Best Day workshop, but I can always trust Frances to step in at a moment’s notice. She’s professional, punctual, and very motivated to make sure everyone reads. She almost always decides the reading order at Best Day, and she’s taken some of our Senior Selfies too. When she’s not in Best Day, she’s working as a landlord, speaking at City Hall meetings, and attending the Constitution Class after Best Day. So please enjoy this story below, so you can see how invested she is in politics and society:

The president seems to believe that he has unlimited powers that are not spelled out in any part of the Constitution I have read. The three branches of the government that include the Congress, seems to be lost on him and that they are not equal to insure that we are not a part of an autocratic government run exclusively by him and his followers. Recent events that makes me remember an event in history: the president tweeted by the Executive branch, stating they would not honor requests from the House of Representatives, that is investigating issues for impeachment. Congress reported that Trump asked the Ukrainian President to probe a political (Joe Biden) rival for the 2020 Presidential election. The illegality of a foreign government to interfere in the election of the USA.

Trump is attempting to put the emphasis on Biden instead of the role he places (Trump is asking a foreign government to assist in his personal quest to find something about Biden and his son).

Joseph Nye was an American lawyer in October 6, 1969, hearing of the Communist activities of the Joseph McCarthy's senate. He said after  McCarthy caused many people to be fired and cases destroyed. He stated to McCarthy, "At long last have you no sense of decency."

I pose this to our new serving President. Have you no shame?? Our leader insists on calling people he disagrees with vile names and rejects the role of a branch of government as if he is an autocrat. He seems to surround himself with only those who do not question his positions that are not in align with policy and now it seems with provisions in the Constitution. 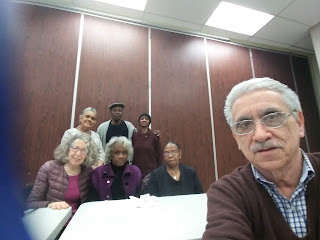 I want to give a huge Thank You to everyone who donated to our 10th Anniversary celebration over the past year. You really made our anniversary one to remember. And the party may be over, but we never stop sharing stories. If you or an older bud have a story to share, send them our way right here. Thanks again for everything you've done for us so far, and Happy New Year.
Curated by Caitlin Cieri
Newer Post Older Post Home