Over the past few weeks, I’ve wished people Happy Labor Days, and several of them said “I don’t have Labor Day off.” That got me to thinking how much of our work schedule we take for granted. We expect most people to go to school, go to college, get a job, get all the holidays off, save up a nest egg, then have a long, comfortable retirement. This lifestyle is getting harder and harder to maintain, especially for seniors. It’s easy to rely on Social Security when you retire, but it’s only a recent invention, and it might die out by 2035. Besides that, seniors who go on Social Security are forced to cut back a lot to make sure it lasts their entire retirement. Some of them have family who can pay for a retirement home, but not necessarily the exact services needed. Others are forced to continue working, many in physically dangerous jobs outside their area in expertise. 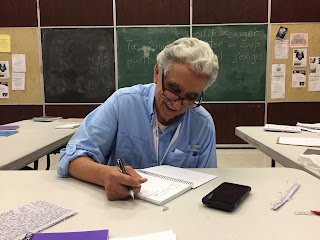 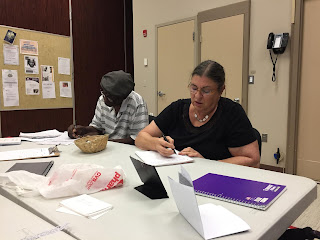 Point being, there are a lot of seniors who don’t get the comfortable retirement they worked for all their lives. And if you yourself can’t support them financially, then support them emotionally. Buy the older bud in your life a nice lunch, take them on a trip somewhere fun, help them look up homes and services, invite them over for a barbecue. And above all, listen. 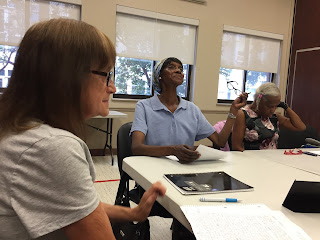 According to Deloris, our cousin who was raised by my grandparents, who was four years older than me and six years older than my sister Gwendolyn (whose beauty earned her the nickname “Baby Doll”), each summer during the 50s and 60s, my sister and I were sent to South Carolina to visit my maternal grandparents. We worked on their tobacco farm, a plowed plot of land boarded by linen covered a rectangular wooded bed in which tobacco seeds were encased. In April, the small emerging plants were removed from the bed, planted in rows, spaced several inches apart. This process was accomplished by three workers. The first worker made a whole in the ground with a pole; the second worker placed the small plants in the hole; and the third worker would place water and fertilizer in the hole. By mid-summer the tobacco plants would have bloomed.

Our job would be topping: breaking small flower-like plants from the stalks, suckering/removing miniature tobacco plants from within larger leaves and worming, pulling green horned tobacco worms from the plants so that they would not devour the profits. Near the middle of July, the tobacco would be ready to harvest. Men in the fields would strip the leaves from the stalks and when they acquired a sufficient bundle, they would place them in a rectangular mule driven vehicle known as a drag whose sides were covered in burlap.

Generally, young boys would drive the drags to the tobacco barn, where the ladies worked. Their job would be to tie the tobacco to sticks. Young girls would hand several leaves to the ladies who would tie them to the sticks. The sticks would be taken into the barn and hung on rafters. Then, the curing process begun.

For at least a week, both day and night, my grandfather would have to check the temperature emitting from the oil heaters. When the tobacco was cured, it was taken to the pack house. The tobacco was unstrung and graded by quality – excellent, normal, and trash – and tied. The latter was accomplished by the tips of a bundle of leaves being aligned and tied together by a leave folded in quarters and tightly wrapped around the tips.

Finally, the tobacco would be loaded on a wagon, driven to town to the warehouse. There, workers would remove the tobacco from sticks and geometrically be placed in wicker baskets according to grade. Auctioneers, followed by a clerk, and a line of farmers swiftly moved down rows rapidly calling out what his company was willing to pay for each basket. The farmers were given slips indicating upon which was written the amount the auctioneer was willing to pay for each basket of wares.

The farmer was given a voucher, which he turned into a caged cashier.

And here's this week's senior selfie, a labor of love by José and his trusty selfie stick. 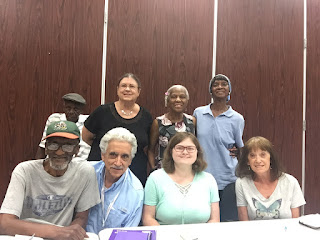