When I go away on vacation, I can count on the older buds to pick up my slack. They know where the sign up sheets are, they know where the writing supplies go, they know how to determine the reading order, and they know when their fellow older buds need some extra help. The only thing I really miss are the Senior Selfies, and selfies are hard to shoot no matter how old you are.

I came back to find that no fewer than 7 older buds came to Best Day and wrote last week. One of the stories was so good that Frances requested her own copy. And Ellie, a volunteer who sat in the week before, contributed her own story this week. Joe did give the class a skip when he heard I wouldn’t be around. But he wrote two stories this week, so he made up for lost time.

Often when people talk about the disenfranchised they either frame them as too weak to do anything for themselves or too strong to deserve help. I am always willing to help our older buds with whatever they need, but I also trust them to run the workshop when I’m not around. 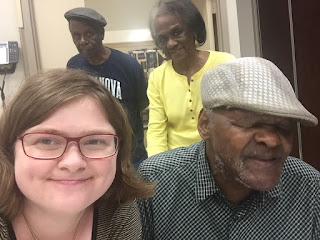 I was one of eight children. I look back at my life and see it as an interesting adventure.
All eight of us were placed in foster homes. Three years old was I when we were separated from our parents, five girls and three boys.
Our oldest sibling, Phoebe, two middle siblings, Bernice, Eugene and the baby of the family, Paul was immediately placed with their foster parent, Ms. Jackson.
My sister next to the oldest, Bertha, my oldest brother, Theodore, another middle sibling, Doris and I was placed in the home of an American-Indian woman and her Afro-American husband, the Walters.
My adventure started when I experienced eating foods that I was not familiar with. I believed to be Indian dishes. There were other meals we had that were familiar. We were given slices of bread according to our age. My sister, Bertha, would sometimes eat some of my food so that I would not get in trouble.
We only stayed with the Walkers for two years because they weren’t as attentive to us as they should have been especially when Bertha and Theodore would go to my mothers house and Theodore would go to my father. Mother and Daddy were separated. Mother lived in South Philly and Daddy lived in Southwest, Philadelphia.
Next we were placed in the care of Ms. Chamberlain. We didn’t live far from our mother and Bertha would send Doris and me to see our mother.
Theodore kept running away, he was placed on a farm called Pomeroy until they let him go. Bertha left and was soon married to her boyfriend Monroe.
Ms. Chamberlain was well educated and she instructed Doris to read to me. I still remember a lot of the nursery rhymes she read. Doris also had the job of combing my hair.
By the time I started school, I knew my alphabets and how to actually write (not
print) my name. By the time I reached the second grade (the first half) I was promoted to the first half of the third grade. Back then, it was one A, one B, two A, two B, etc… I was a very good reader and I learned math quickly.
Doris and I stayed with Ms. Chamberlain for four years. We were removed from her residence because she sent my sister Doris to school with lettuce sandwiches. One of Doris’ girlfriends convinced her to report it to the school counselor.

We were then placed with Ms. Jackson and with Bernice, Eugene, and Paul. For me, that was a very happy adventure because being that I was the youngest (eight years old by then) of the girls, I was ale to play with the other children in the neighborhood. With Ms. Chamberlain, we were not allowed to run, jump rope, or join the other children in our block.
Out of all eight children, I was the only one to graduate from twelfth grade.