The great thing about a group like The Best Day of My Life (So Far) is that it's full of surprises. The first surprise came up when I was writing for Loretta Gaither. Some of the other seniors were talking about Malcolm X, and just when I thought Loretta finished her story, she says that she used to be a Black Panther! "Why didn't you START your story with that?" I asked her, scribbling down as many details as I could.

Earlier in the story, Loretta mentioned how much she had missed Benita and she even said "Maybe one day she'll visit us today." Once I finished writing, in walked surprise number two: Benita Cooper herself! She had some free time after a meeting nearby, and after seeing Hannah saying she was on her way, she realized the universe had given her that time for a reason. So she dropped in the senior center. 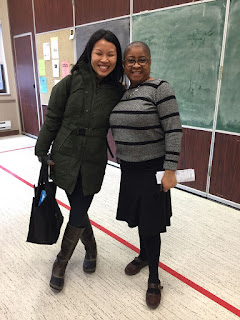 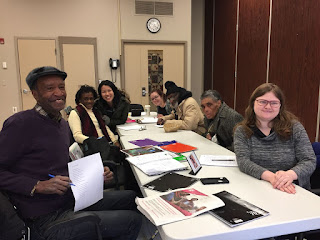 If you're new to the blog, then Benita was both the first Lead Facilitator of our group at Philadelphia Senior Center, and the founder of The Best Day of My Life So Far. She ran the group for years, but after having two children, moving to the suburbs, and getting lots of new groups and facilitators, she moved to working behind the scenes to keep Best Day running. So it was a nice surprise for everyone that Benita could come in that day. She couldn't stay long, but she stayed long enough to catch up with her older bus, hear a few of our stories, and take some pictures. 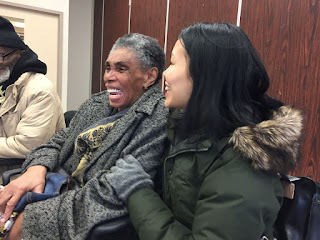 And you know Loretta told her about what she just wrote. How she wrote about Benita coming in, and Benita came in. Benita couldn't believe it; what were the odds? Naturally, I had to post Loretta's prophetic story for today's blog entry:

I had a lovely day today and the snow had left (thank God for that.) And I had fun sitting with my young teacher and we had so much fun talking with her. And I am so glad that she was chosen to be the teacher of this workshop. God chose her to be the leader of the workshop; it was a good choice. She’s much less nervous too. And I’m glad Benita was my teacher too and she made a good choice for a new teacher. Maybe one day she’ll visit us today.
It was a pleasure to have my son drive me to the center today. He’s my power of attorney and my nurse’s aid and a good son. There must be something wrong with my apartment, because my son’s going around and taking pictures. And the manager came up to inspect the apartment, but my son showed him the pictures so he knew I kept it clean. The manager of the complex where they fix things lied to me more than once. He said he got his work done, but he didn’t fix anything in my place since 2013. And I prayed to get everything sorted out, and it did! Now the manager doesn’t speak to me anymore and he got caught. I hope I’ll get moved to a better apartment soon.
Whenever we write, I hear the music from the other room, while they were doing their dance class. And I loved listening to music while I write so I just dance in my chair.
I was a Black Panther when I was a young girl. Loretta Gorham, yes I was. You can look down at the website at the Black Museum downtown, look up Loretta Gorham. You know Morona Africa? She came out of Munchie Prison and she was a friend of mine. And I was with many more and (I’m laughing because my writer can’t hear so well!) You don’t believe me, look in the Black Museum in Black History.
I put God first and me second. I’m laughing with these people in the class. May God bless the readers.
I have a dead man taking care of me and this is what I get. My late husband Rob Gaither, related to Alma Gaither who went down south with the Sixers, with the Eagles. You always get caught when you try to get wise.
I always laugh with them in the class. And teacher, always be aware of people who laugh. I smile upside down, I’m going downstairs to wait for my ride. Over and out, God bless the readers. Signing off.