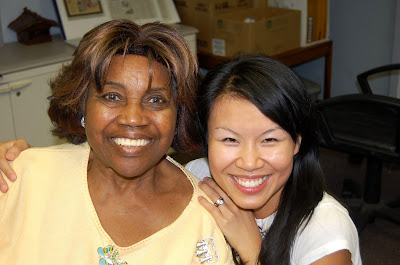 The moments that follow a genuine story are often the most amazing of all. Don’t just listen to an older adult’s story and rush out of the room. The process of telling a story from the heart will unleash all sorts of emotions for the older adult. Stay a while and give these emotions a place to go – keep your heart and ears open to receive them, and receive them gently. These emotions are often delicate and raw. Having another human being entrust his or her deepest feelings with you is not something that many people get to experience. Sticking around for a few extra minutes is nothing compared to the powerful human connection you will get to feel.

The Moment that Inspired This Tip:
I discovered this tip years and years ago but it still feels like yesterday. I still remember thumbing through the notebook pages as Hattie walked back in after our group session. I was the only person left. Besides the sound of paper, the room was quiet.

"So we were at the hospital. I was saying something to Grandmom. I don't remember what it was about. She smiled. Then she took a breath, like this," Hattie took a deep breath. "And her dentures slipped out a little. Her mouth softened, you know. I said to her, Grandmom, you aren't dying, are you? You know I am scared of dead people. And Grandmom looked at me and smiled. That was how she died. I cried. I told her I love her. All these years... and I've never been able to talk about it like this."


The Story that Inspired This Moment:

In later years, November 26, 1974 approximately 8pm, Grandmom died in my arms, with a smile on her face as I tearfully whispered - I love you.
Newer Post Older Post Home