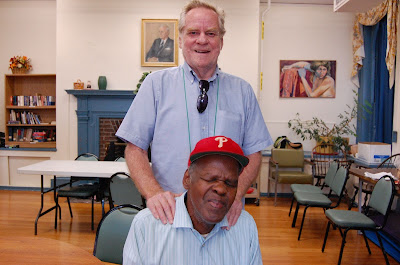 Boxing is my absolute favorite workout (oh yeah!) so when Mo told a story about the sport, I was all ears. And as you know, what’s cool about this project is things keep getting cooler and inspiring unexpected things week after week. So guess what? Mo’s story didn’t just end that week – it prompted Joe to tell his own story about a boxing match the week after. When Joe dedicated his story to Mo, Mo beamed and everyone cheered. Everyone was so loud – I love it when they get crazy like that. It was almost like we were at our own mini boxing match. Whatever battles they are fighting in their lives, during that moment, in my mind, they have won.

At the corner of the main street in town and a street 2 blocks west of the only red light, was the town bank. Next to the bank was an electric store, which sold radios, phonographs, and record albums. When TV came (maybe in the late 1940s), they would place a set in the store windows which we could watch from outside.

Our favorite show was the boxing matches on Friday nights. We had learned the names of the fighters by listening to the fights on radio for years and it may have taken to the fifties before we could watch them on the Danenhower Electric Store TV screens. We missed the great Joe Louis, heavy-weight champion, but we saw the incredible middle-weight champion, Sugar Ray Robinson, and the feather-weight champion, Willie Pep, fighting Sandy Sadler. And we saw heavy-weight Rocky Marciano.

For nearly 12 years, Joe Louis was the heavyweight champion of the world. His nickname was the Brown Bomber. He was the first prizefighter that I can remember as I was growing up. His final boxing match was in late September 1950. His opponent was Rocky Marciano, a young upstart heavyweight.

By the end of the fifth round, it was easy to tell that Louis lacked the power of his earlier fights.

I was at home watching. I was nervous, because I could sense that Joe’s strength was gone, and I was rooting for him. He wasn’t reacting to Marciano’s punches. The end finally came in the eighth round, after Marciano threw a right cross that knocked Louis through the ropes and nearly out of the ring.

At that moment, I felt more emotional than anything. I didn’t scream or do something physical. But I knew it was the end of an era in sports’ history. I was eight years old. It made me realize that even a champion has to succumb to defeat; however, it didn’t change my mind about being a fan of boxing for many years.