Best Day has mentioned before that it's done a project where people write stories related to their family heirlooms. With the weather getting warmer and Spring on the horizon, it only seems right to feature stories about the things we may find during Spring Cleaning.

This is a story about my father Aaron Kazdan, who was born in 1918 and the year never meant that much to me except it was his birth year but now the last pandemic in the world, the Spanish flu, was in 1918 so that year makes me realize that my father was born during a pandemic. And I never heard anything about that pandemic, strangely.
My father, when he was in his 20s, was in the Canadian Airforce. So, I grew up with this painting hanging in my parents’ house, my whole growing up years. My father died in 2005, very strangely he died on the very day we bought this house in Center City, so he never knew about it or got to see it. It was on the day we were closing on the house and we went ahead and closed even though my father had just died.
So about 10 or 15 years before my father died and my parents still lived in their big house, I got up the nerve to ask them if I could inherit this painting because I’ve been an art lover all of my life and I wanted to stake my claim to this beautiful painting that was done by one of his buddies in the Canadian Air Force. I don’t even know the person’s first name but I think his last name was McClellan. So, I was surprised when my parents said “Just take it now.” So, I took the painting and I hung it in my house. It hung in my suburban house for a number of years and now it’s been hanging in this house for 14 years.
It shows my father in his 20s. The other thing is that I also inherited—or I took, I guess you would say when I was cleaning up my parent’s house when they moved to another apartment out of their suburban house—I took all of my father’s letters that he had written while he was in the Air Force. A lot of them were to my mother. Somebody had fixed them up as pen pals when my father was in the Air Force and he wrote a lot of letters to my mother. He had actually never even met her at that point. But he seemed to be very taken with her and he told her a lot of details about his life in the Air Force. And I was very moved to be aware of my father’s voice when he was about 24 years old, especially now that I’m 70.
To have that view into my father when he was so young, and he was quite different from the father that I remembered growing up. My father was very quiet and didn’t interact that much. He was very introverted. But in his 20’s he seemed to be quite different, he seemed very lively. It gave me a very different perspective into my father. So, I have his letters and every once in a while I read them. I still think I should be compiling them and putting them into some kind of a book, but I haven’t done that yet. I guess the pandemic is the time when people seem to do those kind of things, but I haven’t. And I have his painting. 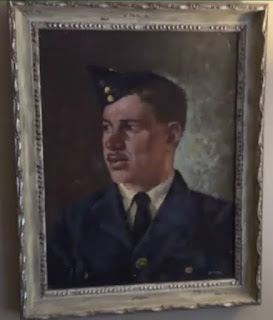 So my namesake, Ann Von Dehsen, was my paternal grandmother. She died a few years before I was born, and I only knew a few basic facts about her. She was quiet, kind, and loved to laugh. She and my grandfather never had much money, but managed okay by living in a small New York City apartment before buying a small house in New Jersey. And she was well-loved by my father and his sister, my Aunt Dorothy. I had just one tattered picture of her laughing as she sat on a tiny fire escape of a city apartment. But growing up, she was more of a story than a real person to me.
Then, about ten years ago, my sister and I took a trip to Maine and visited our ninety-year-old Aunty Dorothy on the way. During the visit, she gave us each a piece of jewelry that our grandmother had once worn. My sister received a garnet pendant necklace and I received a ring that surprisingly fit me perfectly. We guessed that the stone was an aquamarine, and I have worn it proudly knowing that she too had worn it so many years earlier.
Well a few years later, while in a jewelry store, the jeweler complimented me on the setting of this ring and guessed that it was quite old. I asked him if he thought that the stone was really an aquamarine. After looking at it carefully, he told me, “Well, it’s actually just a piece of colored glass,” explaining that diamonds and gemstones were somewhat rare and therefore very expensive back in the late 1800s. He said that many rings had glass stones, and my ring very likely was also my grandmother’s engagement ring. So I liked this romantic story, and upon returning home I got out that very old, tattered sepia photo of Ann in the city. It was very hard to see, but she’s definitely wearing a ring, which I choose to believe is now my ring. So, knowing we share a name, a ring, and a love of city balconies, she’s become less of story, and finally more of a person to me.
Because looking back, my sister and I always wonder, we didn’t really ask that many questions about her. You know, she had died before either of us were born. We knew more about my maternal grandmother, but we just never asked much about her. And also, when we went to my Aunt at that time and she gave us the jewelry, granted she was older and I don’t think her sight was that great, but when we walked in, she said, “Ann, you look just like my mother.” So that was strange too. Now, through this I feel more of an attachment to her. 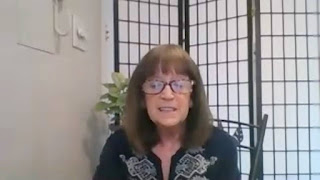 I just wanted to say about heirlooms, I have a large number of my mother-in-law’s, some very expensive jewelry. Some just fashionable. And so I hope my daughter will like some of it. It’s very precious and I wear some of it. She had a lot of jewelry.
Do I have a favorite? Not really because she had brooches and necklaces and bracelets; you name it, she had it. And what was important to me was that different time of the year like at Christmas time, she had Christmas tree pendants and so just had a lot of stuff. Some very nice things.
And long before she died she gave me the family silver, and that’s when my husband said, “You must be really in to get the family silver.”
She was very, very special. When people talk about their mother-in-law, I just can’t relate because we had a wonderful relationship. 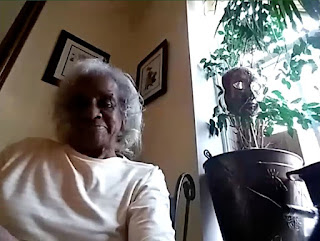 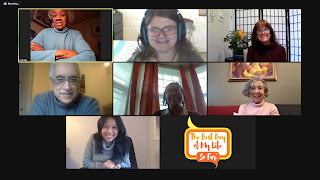