You might remember a few weeks ago I wrote about how sometimes our older buds will talk about something that would make a great Best Day story without even realizing it. Well, I'm happy to announce that I'll be posting two of them today. I wanted to wait a few weeks before posting them since they were recent stories. It takes time to transcribe and proofread our stories. Also, one of our stories is a little darker, and it seemed awkward to put it in the Thanksgiving post. But I'm sharing it now because, like I say, sometimes the best day of your life is when you can talk about the worst day of your life.

I have many intelligent people who say "Guns don't kill, people do." But I don't
know one person who could kill 50 people at once by himself of herself without a gun in their hand. We can arrest the disease of cancer, tuberculosis, and many other diseases that kill people. But we have no remedy for the gun disease. A gun doesn't attack the body as other diseases do. It attacks the mind of those that purchase them. For gun disease, there is no remedy. It is not an individual disease, but a societal one. Anyone can purchase a gun. We have approximately 3500 police officers in the City of Philadelphia. There are more guns owned by private citizens then there are by police officers. There are more guns than people in this city. I do not see the solution to this problem in the near future. In other civil countries where guns are not owned by private citizens, gun have been forbidden by private citizens in those countries such as England, Canada, and Australia, which may have two deaths by guns in an entire year. We all recognize guns as a problem, but our representatives, our congressmen, our senators do nothing to curtail this disease which is the Disease of the Gun. How long will the average citizen wait to rise up and put an amendment in our Constitution to make guns less prevalent in this country.
Why won't somebody listen?
And I've been shot myself. I've had two spine operations for a gunshot wound and the bullet is still there. They didn't remove it because they didn't want me to become paralyzed. But I have to walk with this cane and take pain medication that don't work thanks to those bullets. Good think I was only shot once. And if I got shot with one of those steel bullets, I wouldn't be walking today. That's a story within itself.
They had to find the right hospital with the right equipment. I never found out who shot me. I was just crossing the street when it happened. I didn't even see their face. I don't think my daughter knows and I don't think my grandchildren know. I don't want people insisting I sit down and take it easy. I don't want that anymore and this all happened a good six years before my daughter was born. She was born in '68 and this happened around '62.

In California I was fortunate enough to learn how to teach women from Korea, Egypt, and anyplace else who wanted to learn, how to communicate with each other in the U.S.A.'s English Language. Repetition and demonstration of words and sentences were the methods used. The class was very motivated to learn and use the language that was taught.
I learned about their culture and shared my culture with them. We had meals from each native land, and to no one surprise, we were more alike in what we valued as humans: Family, friends, morals, ethics, belief in a higher being, maybe with a different name, and to respect each as they respected others.
The Korean women kept their maiden name, different from most of the Americans who, after wedding, assume their husbands' last name

If you're in the area, please stop in the Philadelphia Senior Center for all sorts of fun events tomorrow. At 12:30 in the auditorium, there will be a performance piece produced by The Wilma Theatre, starring the older buds of PSC, including our very own Nouria. And at 1:30 in the cafeteria, our own Eugene Charrington will be hosting a reading and book sale/signing alongside Ikru the Poet and Miss Odessa.

And finally, here's a senior selfie from none other than Frances Bryce herself! 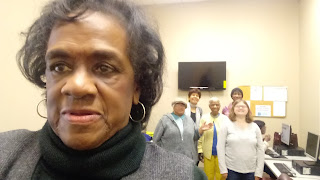